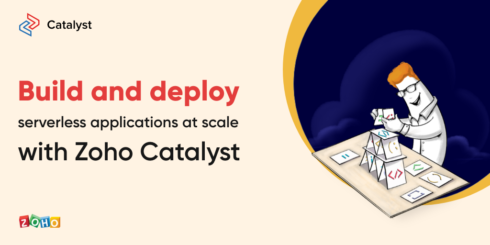 In an effort to help developers build and deploy serverless applications at scale, Zoho Corporation is launching a new full-stack serverless platform. Catalyst is designed to deploy apps and microservices at scale while reducing time and costs.

According to the company, developers are too often bogged down dealing with provisioning, monitoring, scaling, patching, logging and updating servers. Catalyst handles the operational details while developers build the applications.

RELATED CONTENT:
Evaluating if serverless is right for you
Rethinking the way your build software with serverless
Choosing between serverless and containers

“The best craftsmen make their own tools. To create the comprehensive suite of business apps that we offer today, we had to build tools first. Those tools, along with the infrastructure we built over the years, is now available to developers through Catalyst,” said Raju Vegesna, Zoho’s Chief Evangelist. “With a strong belief in developer productivity, we’ve been offering several serverless capabilities to developers before it was even called serverless. Our commitment to end-to-end solutions has enabled us to offer a comprehensive suite of no-code, low-code, and pro-code tools.”

The backend components features things like a relational database, file storage or caching capabilities, allowing developers to store and retrieve data as necessary when building an application, the company explained.

The function as a service piece allows developers to write functions in Java or Node.js without having to deal with provisioning or scaling. Zoho plans to add more support for programming languages soon.

Other features include artificial intelligence and machine learning services such as optical character recognition and object detection; command-line tools; web and mobile SDKs and APIs; and a unified interface.