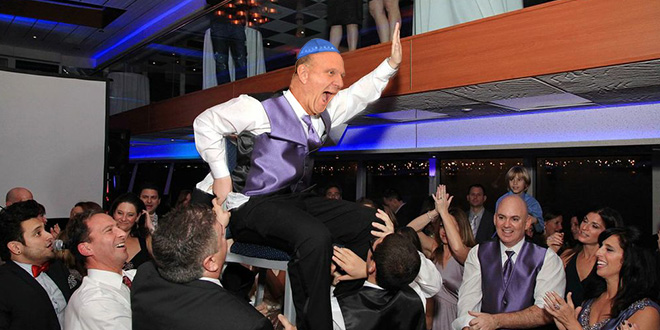 Steve Ballmer is finally becoming a man…in the eyes of the Jewish people, anyway.

In the closing presentation of the WSJD Live tech conference on Wednesday, the former Microsoft CEO and new NBA owner gave a wide-ranging onstage interview touching on his life, Microsoft, his ownership of the L.A. Clippers—and the revelation that he’s studying Hebrew in preparation to finally have his Bar Mitzvah.

Ballmer is half-Jewish on his mother’s side, according to The Jerusalem Post, and during his tenure as CEO oversaw multiple Microsoft operations and expansions in Israel, while also serving as a member of the Jewish National Fund’s World Chairman’s Council. Now, at age 58, he’s finally going to step up onto that bimah and earn his fountain pen – the traditional gift given to Bar Mitzvah boys for generations.

I expect the Ballmer Bar Mitzvah will be one for the ages. All of us in the tech community anticipate a heartfelt, emphatic Torah reading, a booming speech that lifts the synagogue-goers out of their seats and some sweet, sweet dance moves at your over-the-top Bar Mitzvah ball. Some advice from a seasoned Bar Mitzvah vet: Don’t skimp on the smorgasboard at the cocktail hour, Steve. Pull out all the stops—stuffed cabbage is fine (no “pigs in a blanket” at your kosher affair!) but to keep the men’s club and sisterhood buzzing for weeks afterward – not to mention celebrity gossip websites – park yourself at the bottom of the Grey Goose vodka flume and let it flow.

Another idea you’ve surely already thought of: hold the party in the Staples Center! Blast some Gloria Estefan in the arena like old times, deck the Clippers out in custom yarmulkes and have CP3 emcee the evening. If there’s a Guinness World Record record for the highest Bar Mitzvah chair lift, Blake Griffin and DeAndre Jordan can break it while your guests, ranging from Bill Gates and Satya Nadella to Doc Rivers and NBA commissioner Adam Silver, join hands and dance an arena-wide hora around you.

I’ve even got a can’t-miss name to ensure your Hebrew coming-of-age extravaganza is a smash hit: call it a Ball-Mitzvah.

(Related: How Ballmer introduced himself to Clippers Nation)

On a slightly more serious note, Ballmer is clearly enjoying post-Microsoft CEO life to the fullest. He finally got his hands on a professional sports franchise—by paying almost quadruple its market value—and filling out the rest of his time with an adjunct college professorship at USC and his aforementioned Hebrew studies.

Those of us who’ve followed Ballmer’s career knew the sports world was getting a yelling, high-fiving, arms-waving owner the likes of which they’d never before seen. Mark Cuban, Jerry Jones, George Steinbrenner and Daniel Snyder all rolled into one. At a time where he no longer has the weight of an international tech corporation on his shoulders, it’s nice to see the guy carrying his larger-than-life personality to temple, too.