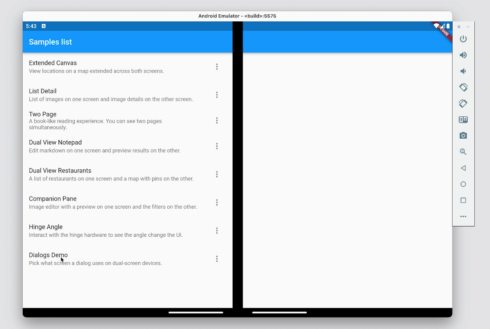 Microsoft has made some announcements regarding its support for developing for foldable devices with Flutter.

MediaQuery now has Display Features, which are parts of the display that can be obstructed by hardware features, such as the hinge on the Surface Duo.

When users switch over to the master channel on their local Flutter setup, they can now access a property called ‘displayFeatures’.

When users want to display content on only one screen of Surface Duo, which is the case when they’re showing a dialog, they now have the option of using the ‘DisplayFeatureSubScreen’ widget. The widget is mostly needed for modal routes and is used in the “Dialogs and popups support” PR.

“Some of our contributions have not yet been merged. If you want to give them a try today, this is now far easier to do compared to when we first proposed these changes. Back then you had to configure a custom Flutter Engine. Things are a lot simpler now,” Andrei Diaconu, senior software engineer of Surface Duo Experience wrote in a blog post.

In addition, the Flutter team has recently released Flutter 2.10 in which the most important announcement is that Windows support has reached production quality.