Oculus Rift is finally making strides. The virtual reality headset that was first announced three years ago will finally be making it into consumers’ hands early next year. The company’s CEO Brendan Iribe introduced the consumer version of the Oculus Rift at the company’s press event yesterday.

“The Rift delivers on the promise of consumer virtual reality and next-generation VR gaming,” the Oculus team wrote in a blog post.

The Rift will feature custom display and optics technology, a tracking system, an integrated VR audio system, and an improved headset design to provide balance and stability. In addition, the company included a mechanism in the headset that allows users to adjust the distance between lenses.

The company also announced a partnership with Microsoft to bring the Oculus Rift to Xbox One.

“Developers wanted an input device that was robust and versatile enough to enable next-generation games and experiences in this first generation of VR,” according to the blog post. As a result, every Oculus Rift will come with a wireless Xbox One controller.

For games that require other inputs, the company has unveiled a prototype of the Oculus Touch: a pair of tracked controllers to provide the sense of touch in virtual reality worlds. “While the Xbox controller is great for many games and genres, we want an input device that lets you to reach out and interact with objects in VR naturally,” the team wrote in the blog post. 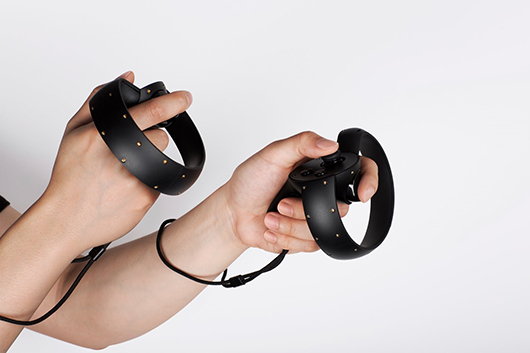 The prototype of the Oculus Touch, called “Half Moon,” features two controllers (one for each hand) with a traditional analog thumbstick, an analog trigger, and two buttons. The controller is wireless, and can recognize hand movements such as pointing, waving, and thumbs up.

To help independent developers create virtual reality games, the company is investing US$10 million to accelerate and support game development. “Not only will these folks bring more and better games for launch and beyond, but we’re looking forward to their inventiveness and creativity in VR,” the team wrote.