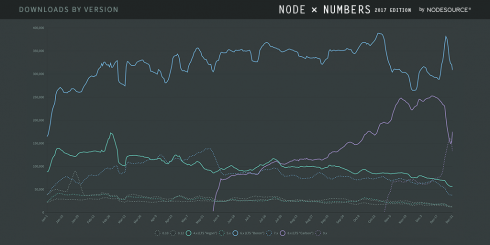 The Node.js company NodeSource is releasing a Node by Numbers 2017 analysis to look at the growth and adoption of the JavaScript project. Node.js is a JavaScript runtime that features an event-driven, non-block I/O model.

“By all measures, 2016 was a fantastic year for Node.js – and 2017 was even better. Metrics across the board show growth and expansion of the platform,” according to the report.

2017 saw three supported long-term support releases: Node.js 4.x (“Argon”), Node.js 6.x (“Boron”), and Node.js 8.x (“Carbon”), making it the first time in history the project has had three supported LTS release lines. “From this point on, unless something changes in the way Node.js LTS releases are managed, we will always have three actively supported LTS release lines when Node by Numbers rolls around,” the NodeSource team wrote in a post. “This means that 2017 is the first time we’ll be seeing the dynamics of adoption and movement from one Node.js LTS release to another—giving the project, maintainers, and end-users better insight into which versions are most supported and most relied upon.”

The most popular download was and continues to be Node.js 6 despite Node.js 8’s upward trend. Node.js LTS usage saw a downward trend last year.

Additionally, the project reached a new milestone in its amount of downloads. For the first time, the project saw one million downloads in a single day last year. Another key finding included a 63 percent increase in the total number of new contributors.

“Year over year, Node.js continues to succeed and grow. Credit for this growth is deserved across the board: to the countless hours that individuals contribute to the project to help build it, to the hundreds of thousands of modules that JavaScript developers have published, and to the developers who use it on a daily basis for everything from Enterprise-grade IoT to rapidly building out basic MVPs,” the team wrote.