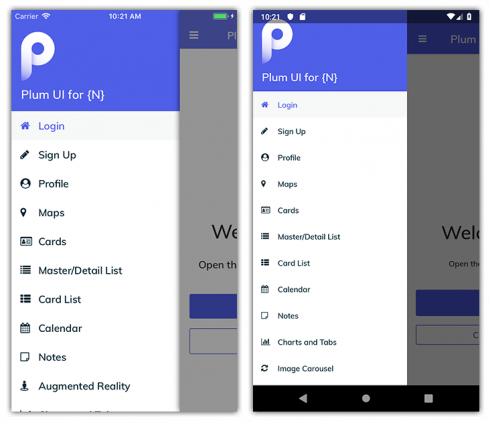 The project is inspired by the Plum UI Kit on Uplabs.

“I’m not sure there is anything that annoys and/or delays developers more than creating an app design from scratch. I mean, some of us have designers who do the heavy lifting, but many of us are left with our own color blind and white-space-disaster user interface implementations,” Rob Lauer, senior manager of developer relations at Progress, wrote in a blog post.

According to Lauer, Plum “leverages the MVVM pattern for easy deployment and SASS for an improved way of managing normally complicated CSS. The project currently includes side drawer navigation, login, sign up, profile, maps, cards, calendar, notes, AR for iOS and charts.

“One of the key value props of using NativeScript is developing for iOS and Android simultaneously, and Plum is no different. While the app was constructed for iOS only in the beginning, a mere handful of UI tweaks and a few lines of CSS were needed to provide full compatibility with Android,” Lauer wrote.