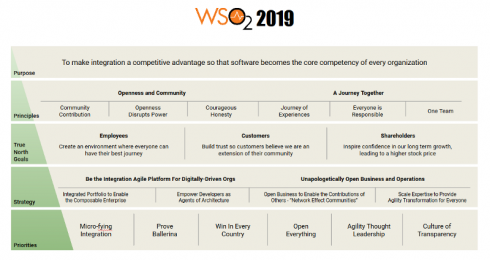 While other open-source businesses are turning to stricter licenses to address OSS business model challenges, the WSO2 says it experienced a successful year last year. The open-source company, who has maintained an Apache open-source licensing model since 2005, reported a $37M Annualized Recurring Revenue and an expected 51 percent growth year-over-year. In addition, the company has added more than 100 new subscription customers, has customers in 65 different countries, and experienced a milestone with more than 50 percent of its product sales organization outside North America.

“Last year, WSO2 was the 8th largest pure open source software company. Given our growth rate, WSO2 is now the 6th largest open source company and we anticipate growing into the 5th over the next year,” Tyler Jewell, CEO of WSO2, wrote in a post.

WSO2 wants to continue to work off that momentum with several plans for the upcoming year. Plans include:

“In 2018, most of the changes that were made to the business were driven by territory expansion, globalizing our sales organization, expanding our field quality initiatives, and revamping our partner programs to capitalize on the dramatic increase in demand that we have seen in emerging markets,” Jewell wrote. “In 2019, we will accelerate these initiatives while introducing a significant evolution of our product and open source initiatives.”