Veracode: DevSecOps is having a positive impact on security, but the state of security still has a long way to go 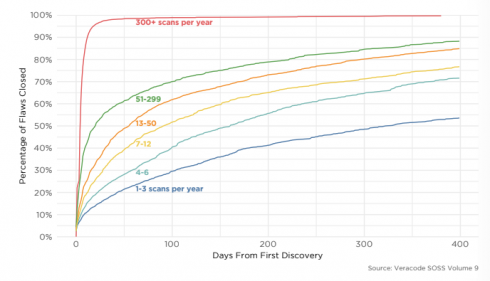 “Our annual SOSS data puts hard evidence on the table to explain why so many security professionals experience anxiety when they think about application security (AppSec),” the report stated. “There is no way to sugar coat it: the sheer volume of flaws and percentage of vulnerable apps remain staggeringly high.”

The report also claimed that close rates of vulnerabilities improved by 12 percent this year. Customers closed about 70 percent of the vulnerabilities that they found this year. While this is still an improvement from previous years, it’s important to consider that it only takes attackers a few hours or days to create exploits for new vulnerabilities. “It is crucial to measure both how many flaws organizations close out every year, and how long it takes them to do so,” Veracode explained in the report.

Organizations with active DevSecOps initiatives in place fixed vulnerabilities over 11.5 times faster than typical organizations. “As the DevOps movement has unfolded, security-minded organizations have recognized that embedding security design and testing directly into the continuous software delivery cycle of DevOps is a must for enterprises,” Veracode wrote. “This is the genesis of DevSecOps principles, which offer a balance of speed, flexibility, and risk management for organizations that adopt them.”

The report also found that there is a strong correlation between how often an organization scans for vulnerabilities and how quickly they address those vulnerabilities. There is a comparable jump in fix rate with every increase in scan frequency until organizations hit 300 scans per year, at which point the percentage of flaws closed skyrockets to almost 100 percent.