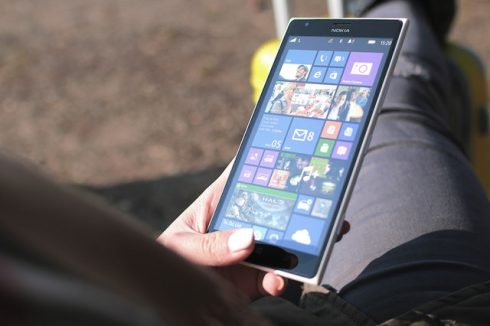 A few months ago, before the COVID-19 pandemic broke out, the near-term future of the smartphone seemed obvious. We were moving to foldable devices with the only question being whether these devices would unfold to get to tablet size (Samsung) or fold down to fit better in your pocket (Samsung, Motorola).

But with the collapse of most of the events that would have promoted these new designs, the market appears to have lost interest. Instead, the focus now seems to be on security and third-party products like Blackberry Protect. And, rather than buying a new phone, the focus is on figuring out how to make one already in use last longer. Finally, health applications appear to be on the rise, which should promote accessories like the smartwatch with sensors that monitor things like your temperature and heart rate, over phones.

Let’s take each in turn.

Security
When a lot of people are stuck at home, a significant number of folks turn to find ways to scam others. We have seen a sharp uptick in phishing attacks, and apps that contain malware that does similar things to what we’ve seen in PCs for decades.

Part of the reason for this is that while before people often were safer behind enterprise-grade firewalls, now they are mainly working from home and their home network protection not only isn’t as good, they appear to be using their smartphones for more things because of the inability of many companies to provide them with laptop computers.

Suddenly products like Blackberry Protect for Mobile are getting a lot of attention as companies struggle with assuring their users aren’t exposing their companies to the increasing number of outside threats. This change suggests we should see moves by the major OEMs to promote unique security features, and I don’t see this increased focus on security decreasing any time soon.

Smartphone sales decline
When money is tight during a recession or a depression, people tend to try to make what they have last longer. This suggests a decline in phone sales, particularly in the mid-range of the market, because people will tend to either leave their phone in use longer or move down the market to conserve cash if they can’t put off replacing their phone. It is interesting to note that high-end phones may hold reasonably well because the wealthy traditionally haven’t been as impacted by events like this. Still, the middle and lower classes tend to get walloped.
Part of the cause for these declines is a pullback on marketing by the OEMs to conserve cash, and this will undoubtedly happen across segments. But some OEMs may hold marketing and thus, assuming that marketing is effective, get a more significant portion of this reduced TAM (Total Available Market). This trend should open the door to potentially substantial share shifts between vendors and become a real test for Apple, which has reduced marketing over time and has, in the past, been able to weather these storms reasonably well.
Now, this could be partially offset by the 5G rollout, but only if that rollout is aggressively marketed, and people see their current phones as obsolete. And substantial subsidies upfront could also significantly offset this downward trend.

Wearables
On the other hand, there appears to be increased interest in wearables, particularly if they can be used to improve the early identification of someone who is infected with the virus. Most wearables currently don’t do this well yet but expect that by year-end, this will be a new target for this class, and depending on how capable these new smartwatches are, this should dramatically increase demand for this class of device.
Also, we should see an influx of alternative wearables like headsets that also monitor the health of the user. There is an apparent demand for wearables that monitor and can accurately report on health.

Wrapping up
The economic downturn is having a significant impact on buying behavior. Expect a greater interest in security applications and wearables that monitor the health, and reduced demand for new phones. This demand decline will be partially offset by the 5G rollout, which will obsolesce most of the phones people currently have. But that will depend mainly on the effectiveness of the related marketing, which should be tied to the new pandemic-driven behavior — working and streaming at home, video conferencing and the like.