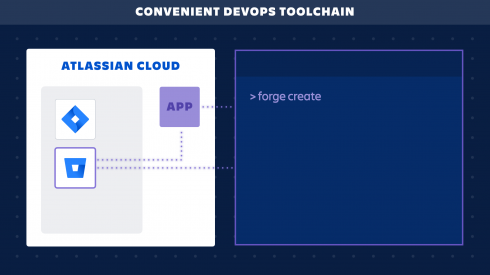 Forge has been in beta since the beginning of 2020 and is designed to handle many of the maintenance aspects of app creation such as compliance, data management practices, scaling performance and security.

“Forge is the culmination of over 2 years of work, during which we re-envisioned what modern cloud extensibility should look like in the next decade and beyond. We believe customers will increasingly ask for higher standards from app developers: everything from compliance and data management practices to scaling performance for tens of thousands of users,” Mike Tria, head of platform engineering, wrote in a post.

The solution is made up of three main components: a serverless Functions-as-a-Service (FaaS) hosted platform, a declarative UI language, and a DevOps toolchain, all of which serve three main pillars.

The first pillar is that Forge allows developers to build Atlassian-wide applications that have all the power of the Atlassian platform including data residency for customers that want their data in a particular place, encryption, audit locking, and audit trails, high scale and performance and is built on Atlassian’s own cloud infrastructure. According to the company, more than 60% of Atlassian customers use at least one app or integration from the Marketplace to solve their specific needs.

“When you build an app for some for a third party, you’re hosting it yourself and you’re spinning up resources on AWS, Azure or GCP. You’re solving your own forms of compliance, you’re dealing with data residency and you’re dealing with running data,” Tria told SD Times. “In Forge, you write serverless code, and then Atlassian takes it from there, we host it and run it so you basically get the benefits of the platform.”

The second pillar is around security and enterprise, building enterprise capabilities such that every Forge app is an enterprise by default and can serve enterprise customers  in a more explicit way than Connect, Atlassian’s previous framework for extending Atlassian cloud products and an option for building apps on Jira Cloud since 2014.

Atlassian said that Connect will still have some use cases – especially in a transition to Forge that takes place over time. Atlassian will keep some elements of Connect (such as the ability to have remote storage instead of Forge-hosted storage), and gradually bring Connect and Forge together as part of a single cloud app development platform.

“In Connect, the way it worked prior is an application would just get access to really any data in your instance. With Forge, that’s really narrowed down so as a customer you can make a choice such as this app can just view issue data for this one API and things like that,” Tria said. “We want the Forge apps to be just as powerful, but we want more power in the hands of admins.”

For security, Forge uses OAuth 2.0 to support more granular scopes and makes sure that apps only access the data they need to perform a customer’s use case.

Forge also lets developers keep customer data hosted in the Atlassian cloud, making it easier to comply with GDPR and other regulatory requirements and stated that it is working towards SOC2 certification for Forge, the company explained.

The third pillar for the Forge platform is to enable developers to innovate faster.

“Getting an app up and running using Connect if you’re very good will take a few hours. With Forge it’s minutes,” Tria said. “Very much at the core of Forge is the speed of development. Again, there’s less heavy lifting. It’s all just done through a simple UI and a command line that we give to developers to run and deploy their stuff so there’s a DevOps toolchain that comes with Forge that Connect never had.”

Recently, Atlassian also added distribution on the Atlassian Marketplace, and new apps like Link Management for Confluence, Visualize with AWS and Easy Subtask Templates have been listed.