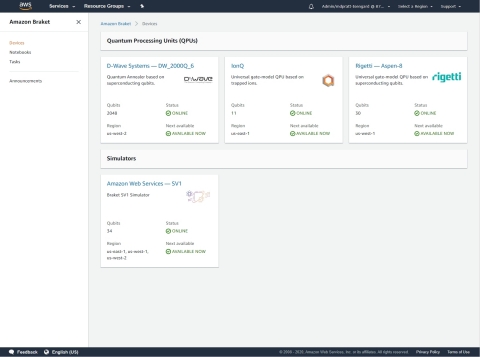 Amazon Web Services has announced the general availability of Amazon Braket, which was designed to help developers and researchers get started with quantum computing, providing development tools, simulators, and access to a diverse set of quantum hardware.

According to the company, Amazon Braket can be used to test and troubleshoot quantum algorithms on simulated quantum computers running on computing resources in AWS to help them verify their implementation.

“Quantum computing has the potential to solve computational problems that are beyond the reach of classical computers by harnessing the laws of quantum mechanics to build more powerful tools for processing information,” Amazon wrote in its announcement of Braket. “Amazon Braket lets customers get started quickly, using familiar tools like Jupyter notebooks to access pre-installed developer tools that can be used to design quantum algorithms, visualize results, and collaborate with others.”

The new release also includes cross-platform developer tools that let users design their own quantum algorithms or choose from a growing library of pre-built algorithms, providing a consistent experience so that customers no longer need to learn multiple development environments.

Braket can also be used to run hybrid algorithms, in which quantum and classical computing is used to overcome the shortfalls that current quantum computing has, according to Amazon.

“The cloud will be the main way that customers access quantum computers and combine those systems with high-performance classical computing for certain types of computationally-intensive research,” said Bill Vass, the vice president of technology at AWS. “Our goal for Amazon Braket is to be a catalyst for innovation across the quantum community, bringing together hardware and software developers, researchers, and end users.”