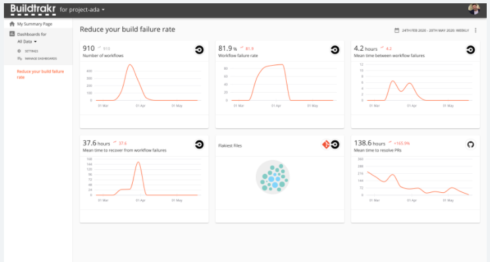 CircleCI wants to help developers enhance their speed, efficiency, and usability with new updates to its platforms. Additionally, the company announced its first analytics plugin Buildtrakr.

Buildtrakr integrates with CircleCI and Git to synthesize commit and build performance data, and displays critical metrics in a flexible dashboard.

“Buildtrakr unleashes the full potential of CircleCI’s API. Users can pinpoint how to continually improve their build, test, and deployment capabilities all in one, simple dashboard,” said Tom Trahan, the vice president of business development at CircleCI.

Buildtrakr includes Surface 7 critical metrics in a dashboard with a drill-down and trend analysis, authentication via GitHub, the ability to integrate with CircleCI and Git to synthesize data that is critical for understanding commit and build performance, and continuous updates to add further metrics and analytical capabilities, CircleCI explained.

In addition, the insight endpoints now offer start and end date parameters for workflows and jobs that restrict the range of executions returned based on their start times.

The newly released next-gen convenience images span the languages: Python, Ruby, Rust, Go, and several others that come with improved documentation, more stability, and benefits from the highly efficient infrastructure they’re built on, according to CircleCI.

“As companies rapidly shift to digital-first, more cloud, automation, and developer tools are being called upon to facilitate these transitions. With this surge comes even more pressure for developers to perform fast and efficiently,” said Jim Rose, the CEO of CircleCI. “To alleviate this added pressure, CircleCI is dedicated to meeting engineering organizations – from startups to enterprises – where they are so they can focus their time on building what matters most.”