CodeFights rebrands to CodeSignal with new coding score for developers 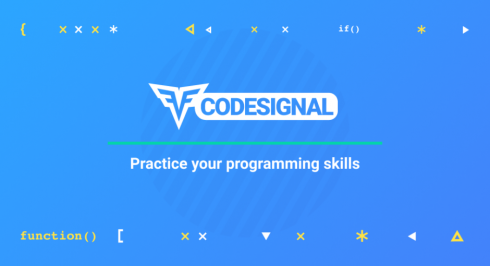 CodeFights is restructuring its focus under the new branding CodeSignal. The company said CodeSignal better reflects its efforts to hone in on technical skills and provide unbiased skills data to developers and recruiters.

“Our goal is to ensure that we can provide a completely objective way of signaling your level of skill to those that matter,” the CodeSignal team wrote in a blog post.

As part of its rebranding, CodeSignal is also launching a coding score designed to measure a developer’s implementation and problem-solving skills as well as predict how well they will do in a technical interview. The coding score requires users to solve at least three tasks, then scores them based on the difficulty of the task. Developers can also work to increase their coding score by attempting more tasks and practicing.

“Before the credit score became an industry standard, the lending market was at the discretion of a loan officer who might make a decision based on how you were dressed or talked, their own biases, or on whether or not they were having a good day,” said Tigran Sloyan, CEO of CodeSignal. “A credit score made the lending process a lot more objective, and scalable using data. This is what CodeSignal is doing for technical recruiting – making the hiring process less subjective and enabling companies to hire technical talent based on data, and not gut intuition or unconscious biases.”

The company says it uses a machine learning algorithm to assess coding scores and technical interview performance. In addition, how fast a user completes a task will be a factor in determining their score.

Lastly, the rebranded company announced the redesign of its user profile so developers can highlight programming skills and share their link with potential employers. According to CodeSignal, developers can think of their new profiles as their new developer resumes.