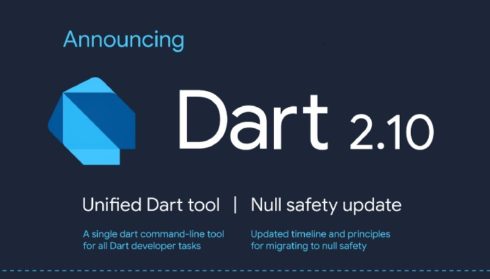 The latest release of the programming language Dart features a unified developer tool designed to tackle all needs such as creating projects, analyzing and formatting code, running tests, and compiling apps.

The new ‘dart’ developer tool is very similar to the ‘flutter’ tool, according to the company. Flutter also includes this new Dart tool in the Flutter 1.22 SDK.

“If you do both Flutter and general-purpose Dart development, you get both developer experiences from a single Flutter SDK, without needing to install anything else,” Michael Thomsen, product manager working on Dart, wrote in a blog post.

The Dart 2.10 release also includes an update on the null safety roadmap and timelines, and a discussion of the principles for migrating existing code to null safety. Null safety helps with avoiding hard-to-spot null errors and adds performance improvements, Thomsen explained.

The introduction of null safety into the solution comes with Flutter experimentation with technical preview 2 and likely within the next month, the team expects to have the complete Flutter framework migrated.

The team plans to publish a beta version of the feature later in the year and users won’t need to pass the experiment flag to use it.

“We hope to see package owners begin migration of their packages to null safety, with that one last round of validation that the feature is ready for a stable release,” Thomsen wrote.

However, null safety is a fundamental change to the Dart typing system and would require carefully adhering to a set of principles for migrating to null safety listed here.

Over the coming stable releases, the team plans to add more to the ‘dart’ tool and gradually deprecate the smaller tools including dartdoc, dartfmt, dartanalyzer, and more.