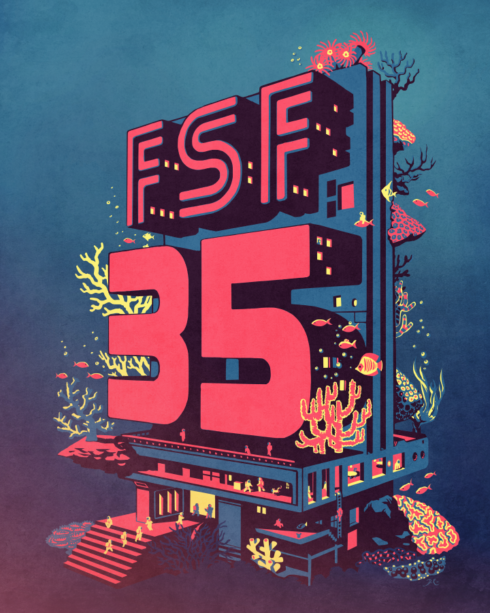 The Free Software Foundation (FSF) has been fighting for software freedom for 35 years now. It all started on October 4, 1985 when Harold Abelson, Robert J. Chassell, Richard M. Stallman, Gerald Jay Sussman, and Leonard H. Tower, Jr. established the Free Software Foundation Inc. Their vision from the beginning has been to encourage the public to share software and other useful information.

“I’ve been fortunate to be a member of the FSF staff for almost half of these thirty-five years. Standing up to the biggest, most powerful companies and governments on the planet is exhausting work. In addition to the multiple generations of FSF staff and board members, I want to thank all of the community supporters — activists, hackers, donors, volunteers — who have stuck with us through the ups and downs, knowing the vital long-term importance of the FSF as a staunch protector of computer user freedom. We’ll take a second to celebrate how far we’ve come, and then take that energy to keep moving forward,” John Sullivan, executive director of the FSF, commented.

According to the foundation, free software gives users the right to run, change, share and contribute as well as helps promote and support other fundamental rights like freedom of speech, press and right to privacy.

“Our work will not be finished until every computer user is able to do all of their digital tasks in complete freedom — whether that’s on a desktop, laptop, or the computer in your pocket. The fight for free software continues, and we wouldn’t be here without you,” the foundation wrote in a post.

To celebrate its 35th birthday, the foundation is launching a new FSF video, anniversary-themed artwork and a livestream event with guests from around the world. The artwork features an underwater theme, which can be purchased as a t-shirt or poster.

“A reef is home to thousands upon thousands of different species of fish, cnidarians, molluscs, crustaceans, and more, all built on the bedrock infrastructure of the coral. Sound familiar? Colonies of coral share resources by circulating food and water between individuals; they can split apart collectively or individually to go separate ways, or multiple colonies can join together in cooperation. Humans stand to learn much from coral — lessons already embodied in the free software movement,” the foundation wrote.

Other ways the FSF is encouraging people to celebrate is by trying a fully free distribution of GNU.Linux, taking an hour to follow the Email Self-Defense guide, downloading and experimenting with the GNU Emacs text editor, and making the commitment to replace one nonfree program.