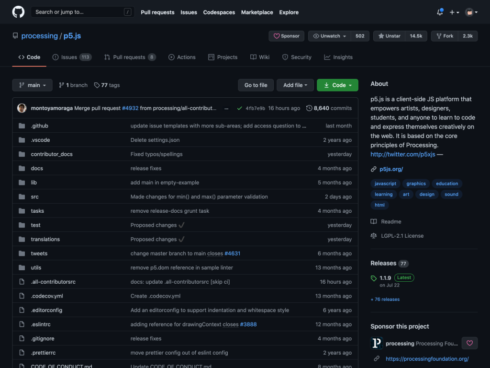 GitHub wants to improve the daily lives of developers as well as make it easier for companies to invest in open source with new updates and features announced at this week’s GitHub Universe conference. The conference runs until December 10, and sessions can be viewed on demand after the event.

Here are a number of announcements that the company has made during GitHub Universe so far:

GitHub Sponsors
This is a feature that was launched last year to allow individuals to support open source developers. Now the program has expanded to allow companies to invest in their critical open-source dependencies as well.

“For many businesses, open source provides critical components for their software and services, and they would like to support the maintainers of those projects so they can continue to thrive. However, setting up individual procurement agreements in many organizations can be a complex task for both the company and the recipient of the funds,” Shanku Niyogi, senior vice president of product at GitHub wrote in a post.

Companies can use either PayPal or a credit card to make payments to open source developers.

Improved daily experience
There are a number of new features being released that are aimed at improving the GitHub user experience, such as the addition of dark mode, which is now available as a public beta.

It is introducing auto-merge for pull requests, which provides pull request authors with the option of opting in to having a pull request merged automatically once it has passed reviews and checks, rather than having to monitor requests and merge them manually.

GitHub is also making Discussions, which was introduced as a limited beta last year, available in all public repositories. Discussions allows open-source projects to have a dedicated space to connect, ask and answer questions, and have open-ended conversations, the company explained.

GitHub Actions also got a few new updates, such as environments, required reviewers, deployments and deployment logs, and a workflow visualizer. Environments enable separation of deployment and development spaces. Required reviewers is a feature that pauses attempted deployments until a reviewer approves them. Deployment logs show which version of code is running in an environment, when it was deployed, why it was deployed, and past versions. Workflow visualization maps workflows and tracks their progression in real time, which helps teams break down and understand complex workflows and communicate status.

Another new feature is dependency review, which shows which dependencies were added, removed, or updated. It also shows release dates, how many projects those components are used in, and vulnerability information. This feature helps reviewers and contributors understand their dependencies and possible vulnerabilities in them.

GitHub Enterprise Server 3.0 RC1
This will be shipping on December 16 to enterprise customers. GitHub Enterprise Server 3.0 introduces new CI/CD and automation capabilities, such as the ability to automate Advanced Security, including new features secret scanning and code scanning. Secret scanning is being introduced as a beta feature, and it allows developers to scan for hard-coded credentials in a repository. Code scanning is a feature already available in GitHub now being added to Enterprise Server. It helps developers find and prevent security vulnerabilities.

This release also adds support for GitHub for mobile, enabling developers to work in GitHub Enterprise Server instances wherever they want.