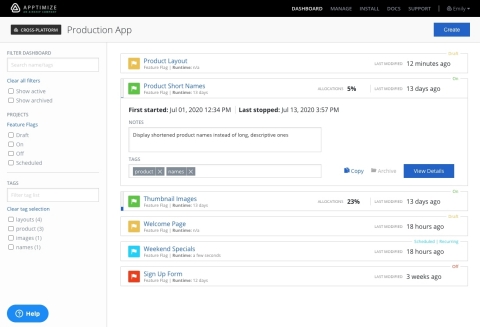 Airship launched free feature flags by Apptimize, enabling app developers to control the scope and timing of feature launches to validate success and reduce risk prior to full rollout.

Developers can use Apptimize Feature Flags to choose when and to whom new features are accessible, and easily turn them on or off.

“Exceptional mobile-first experiences are more important than ever as companies strive to offer customers new levels of ease-of-use, convenience, and innovation that win their hearts and wallets,” said Brett Caine, CEO and president, Airship. “However, there are far too many businesses that maintain a ‘best guess’ and ‘fingers-crossed’ mentality that risks precious development resources, creates suboptimal user experiences, and jeopardizes hard-fought, expensive user acquisition efforts. We’ve now made it even easier — and free — for businesses to adopt feature release management and start reaping the rewards that optimization unlocks.”

According to the company, customer deployments confirm that moving from traditional self-managed CI/CD to the Kubernetes-native Codefresh Runner results in considerable savings, typically 85% of overall maintenance costs that can run hundreds of thousands of dollars annually.

“Best of all, the Runner self-updates and does not require management overhead like traditional software, making it possible for engineers to focus their time on things that are more valuable than software maintenance, like productivity and improving uptime,” said Dan Garfield, the chief technology evangelist at Codefresh.

“This is a significant change that continues to expand our vision to simplify the data science process so that BI, data professionals, and analytics teams can accelerate the development of predictive analytics by taking advantage of AI and data science using automated machine learning,” said Ryohei Fujimaki, the founder and CEO of dotData.

Features and models developed using Version 2.0 are deployable both on dotDataPy as customizable Python end-points and on dotData Stream as real-time stream end-points.

K2 Nexus automates the underlying operational processes that connect employees with customers, removes silos of information to streamline work, and provides enterprise-grade automation for the masses.

In addition, In Q1, 2021, K2 Nexus solutions, a suite of pre-built industry apps and services built on the new Nexus architecture, will be launched, according to the company in a post.

“Pushing rules via the same serverless architecture results in better decisions, made earlier in the process. In mobile deployments, decisions can be made without the lag of server-side processing,” Progress wrote in a post.

By aligning with modern, cloud-based infrastructure where the infrastructure is fully managed by cloud providers, serverless rules execution reduces costs significantly by eliminating the overhead of managing and maintaining “always on” physical servers, virtualized machines or containers, the company explained.