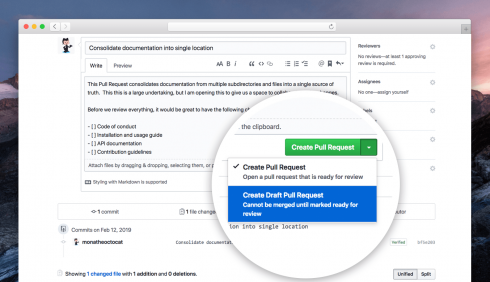 “At GitHub, we’ve always felt that you should be able to open a pull request to start a conversation with your collaborators as soon as your brilliant idea or code is ready to take shape. Even if you end up closing the pull request for something else, or refactoring the code entirely, a good pull request is as much about collaboration as it is about code,” the GitHub wrote in a post.

“For AR experiences to capture users’ imaginations they need to be both immersive and easily accessible. With tools for adding AR selfies, animation, and UI enhancements, ARCore version 1.7 can help with both these objectives,” Evan Hardesty Parker, software engineer at Google, wrote in a post.

Rubrik’s goal here is to create a community centered around its APIs. The program was designed with Rubrik’s customers in mind.

“Many of us in the tech community do not come from a traditional software engineering background. This can make contributing to open source seem daunting. I am a big believer in “small wins” to break large goals into manageable chunks. The excitement around Build has been palpable – everyone wanted their fingerprints on the project, but did not always know how to get started. Over the last few months, I have watched teammates, from Rubrik’s first employee to our content marketing manager, learn and master using Git and GitHub to contribute ideas, edits, and updates to project documentation,” Rebecca Fitzhugh of Rubrik wrote in a post.

Facebook launches updated version of ELF OpenGo
Facebook is launching new features and research findings about ELF OpenGo, the game-playing bot that has faced off against Go champions.

It has created a new model that was completely re-trained from the ground up. It also announced that is is releasing a Windows executable version of the bot to make it easier for Go players to use it as a training aid, Facebook explained.

“ELF OpenGo enables other AI researchers to get firsthand experience on how these systems work. This can help the community improve its theoretical understanding of the training procedure, discover new weaknesses in these algorithms, and eventually achieve better performance with less computational power,” the ELF OpenGo team wrote in a post.