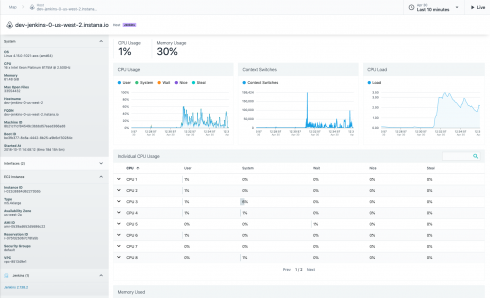 Instana is providing Jenkins monitoring for builds and the Jenkins Stack in the company’s application performance management (APM) solution.

“A common theme amongst Instana customers is the need to deliver and deploy quality applications faster, and Jenkins is a critical component of that delivery process,” said Peter Abrams, Instana co-founder and COO. “The latest monitoring addition to Instana’s automated APM solution for dynamic microservice applications moves up the deployment process to tackle application builds and deployment.”

The updated tool will automatically deploy monitoring sensors for each part of the application technology stack and trace all application requests without the need for configuration or application restarts.

The full details of the new Jenkins solution are available here.

“Through our new Developer Hub, developers can take advantage of the Virtru Data Protection Platform and proven, Zero Trust architecture to maintain control of their data wherever it is created or shared,” said John Ackerly, CEO of Virtru.

In addition, the Virtru Developer Hub enables developers to build privacy centric applications across a wide variety of use cases, including secure sharing of multi-cloud environments to maintaining the privacy and security of data captured by sensors on Internet of Things (IoT) devices and platforms, the company explained.

The company explained that TestProject is built on the open-source test automation tools Selenium and Appium. The solution uses AI-based matching to automatically analyze the application under tests and recommends the addons that will enhance the test.

According to the company, the platform enables developers to set “‘non-breaking breakpoints’ with a single click, collecting live code execution data on-the-fly, without stopping the code or requiring any redeployment.” The company also announced plans to add additional programming languages alongside its existing support.

The platform aims to minimize the time-consuming aspects of debugging providing deep code insights and freeing up R&D resources to focus on features.

CData V2 2019 Update
CData announced sync updates, new drivers and anypoint adapters for MuleSoft with the release of CData V2 2019. This includes more than 150 connectors for MuleSoft and the ability to embed connectivity in any Mule application and deploy on-premise or to the MuleSoft CloudHub, the company explained.