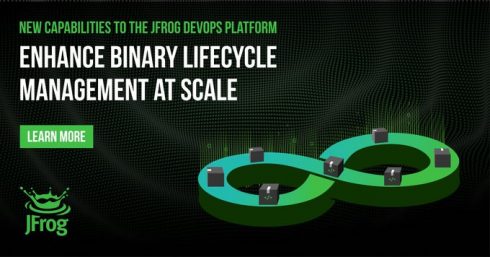 One new capability is Federated Repositories which helps with managing binaries by abstracting the infrastructure layer to create a datacenter transparent repository between different remote locations or instances of the JFrog Platform.

Other new capabilities include signed pipelines for developers to ensure the integrity and security of builds and artifacts, cold artifact storage, dependency scanning and end-to-end visibility and traceability with integrations.

Red Hat announced that it is bringing its JBoss Enterprise Application Platform to Microsoft Azure to ease the shift to cloud for traditional Java applications.

JBoss EAP offers management and automation capabilities that are designed to improve productivity. It also includes a lightweight architecture for building and deploying modern cloud-native applications.

“Our goal is to support as many database types as possible so that teams can realize their true continuous delivery potential,” said Kristyl Gomes, director of quality engineering at Liquibase. “This framework enables our team, our partners, and our community to expand Liquibase database support through development and validation.”

Liquibase also launched a new free course, Introduction to Liquibase Test Harness, which covers how to execute the test harness, create a test and run tests for different database platforms.

ShiftLeft has been accepted into the Open Source Security Foundation (OpenSSF), which brings together technology leaders to improve OSS security.

The ShiftLeft CORE platform is powered by ShiftLeft’s Code Property Graph (CPG) engine that includes a comprehensive suite of code security solutions for developers to integrate security into their existing workflows.

“Like many of our customers, ShiftLeft has benefited greatly from leveraging open source software to build our differentiated products and features. This new juncture further strengthens our commitment of giving back to the community by empowering organizations with code, enabling them with the ability to build and run secure applications,” said Chetan Conikee, the CTO at ShiftLeft.