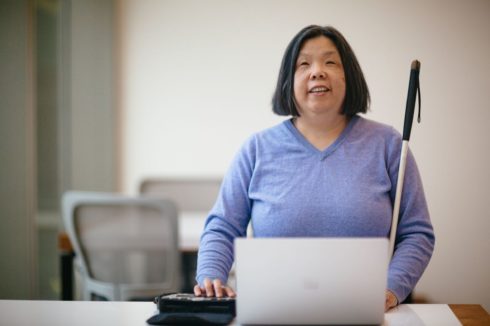 Microsoft announced that it is offering a grant to ObjectiveEd, the makers of the Braille Tutor app, which incorporates AI-based speech recognition to help students practice reading Braille with personalized learning plans. The grant is part of Microsoft’s AI for Accessibility program to help people using AI-powered technology.

The Braille Tutor app was created because currently, only 13% of blind or visually impaired students know Braille and in most public schools, teachers who know Braille only come to the schools once a week to teach personalized lessons, the company explained. The app aims to fix that by helping to teach Braille.

“We have a huge opportunity and a responsibility to be making technology smarter and more useful for people with disabilities,” said Mary Bellard, Microsoft senior architect lead for accessibility. The aim of the AI for Accessibility program, which began in 2018 and now has 32 grantees, is to help people “build something really useful at the intersection of AI, accessibility and disability.”

MIT researchers develop algorithm to give robots a better grip
Researchers at MIT developed a new algorithm that speeds up the planning process that robots use to adjust their grip on objects, thereby giving them a better, faster grasp.

Whereas traditional algorithms would require tens of minutes for planning out a sequence of motions, the team’s new approach shaves this pre planning process down to less than a second, according to a post.

“Seemingly simple variations, such as how hard robot grasps the object, can significantly change how the object moves in the grasp when pushed,” Rachel Hollada, a graduate student in electrical engineering and computer science at MIT, explained. “Based on how hard you’re grasping, there will be a different motion. And that’s part of the physical reasoning that the algorithm handles.”

“Now, Sawtooth PBFT 1.0 is the preferred consensus for  small-to-medium networks — it’s leader-based, non-forking, and fast. PBFT also provides the safety and liveness guarantees that are necessary for operating a blockchain network with adversarial trust. This makes PBFT an excellent option for smaller consortium-style networks,” the Hyperledger Foundation wrote in a post.