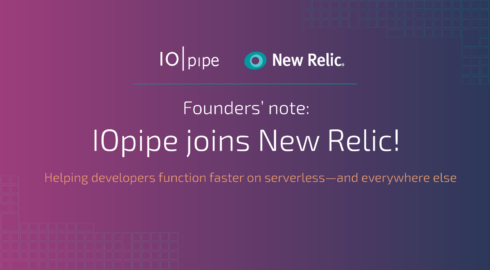 New Relic acquired technology and team members from IOpipe as part of its investment in serverless technologies.

IOpipe aims to help developers build and run serverless applications faster. It provides visibility into AWS Lambda by providing detailed, hard-cardinality data to troubleshoot workloads. The company has put together a migration guide for developers currently using its technology to monitor and debug AWS Lambda apps.

“Going forward, we have a huge opportunity not just to enhance our New Relic Serverless solution, but also to imagine the new ways customers will consume serverless technology,” New Relic wrote in a blog post.

Git 2.24 released
The open source Git project released Git 2.24, which includes new features such as the ability to opt into feature macros and commit graphs by default.

Contributors can now also see what the project values are by using the Contributor Covenant, which is enforced by the project’s leadership. Also as of Git 2.24, the Git project recommends a new, independent tool, ‘git filter-repo’ in place of ‘git filter-branch’

The full details on the latest release are available here.

Since C++/CLI support for desktop development is an optional component, users will need to select it on the installer’s right pane and also have the .NET Core cross-platform development workload.

“We’re issuing the global Visual AI Rockstar hackathon challenge to showcase the evolution in automated testing and what it takes to provide the most complete test coverage required for a world of constantly changing apps, screen types, devices, and browsers,” said Angie Jones, the senior developer advocate at Applitools.

The full details on the hackathon are available here.