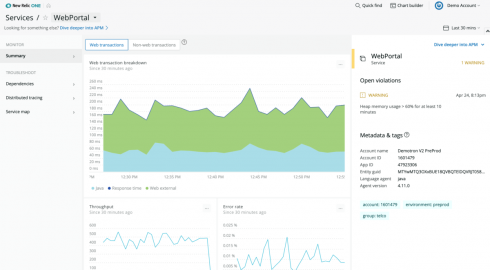 According to the company, this gives organizations the ability to connect their teams to the real-time health of their customer experience. New features include monitoring for AWS Lambda, new dashboards, programmability, global search, and cross-account service maps, which allow teams to manage in a more unified way.

“DevOps teams continue to struggle with a fragmented view of their complex environments due to data about customer experiences residing in multiple systems, dashboards, and organizations,” said Lew Cirne, the CEO and founder of New Relic.

New Relic One aims to solve this by delivering a unified pan-enterprise view of complex environments and a connected search and discovery platform, Cirne explained.

WhiteSource for Developers will enable developers to choose better open-source components from the get-go, detect vulnerabilities in early stages, and speed up the remediation process through automation, shifting the process left.

According to the team, the new pull request feature enables new edge nodes to be defined without new configurations or any impact on the central cluster. The new distributed counters feature improves Internet-based voting and polling systems that required the aggregation of large volumes of simultaneously inputted data from multiple sources.

In addition, RavenDB4.2 offers graph queries, which enables users to add graph functionality to existing data by processing documents as nodes and edges in order to detect patterns between data points. This can be used for predictive analytics, fraud detection and social media applications.

The initial focus of the program is on developers who work with conversational data, including academics who study and explore what’s happening on Twitter, and social listening and analytics companies that build products for other businesses.

“We know we still need to do a better job listening to and learning from our developer community. Labs is a test program to help us do that, in line with the more open, public approach to product development we’re taking across the company,” wrote Ian Cairns, group product manager at Twitter.

VMWare’s goal is to deliver simplified ways to leverage open-source software applications and frameworks, and to free developers from worrying about deployment and infrastructure, according to a company post.

As for enterprise IT, the solution will provide a customized catalog that adheres to security best practices, delivers up-to-date content, is multi-cloud validated, and features rich usage analytics.

DevOps doesn’t need to change — Your expectations do