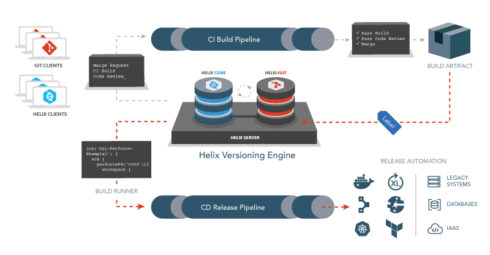 Users can now run commands such as sync, checkout, status, diff, and commit across an entire project. hth-cli also enables multirepo code reviews when used with Helix4Git, allowing developers to review multiple changes at once and merge them atomically.

“Enterprises who want to use Git experience huge challenges with scale,” said Brad Hart, the CTO of Perforce. “By bringing their Git repositories into Helix TeamHub and using hth-cli, they can finally scale Git to meet their needs.”

GitHub integrates with Microsoft Teams
The integration is now available in public betas d  includes the ability to close/reopen issues and comment on issues/pull requests right in Teams.

Users can choose to get notifications for only the organizations and repositories that they care about.

The notification card developers see for any pull request or issue will always reflect the current state from GitHub along with other metadata like checks, descriptions, labels, assignees, and reviewers.

The new setting ‘editor.formatOnSaveMode,’ makes Format on Save only apply to modified lines. Meanwhile, the ‘Format Selection’ command is now multi-cursor aware.

The full list of new features in detail is available here.

Ionic Vue beta now available
The new and improved ionic Vue beta is built with Vue 3 and it now features the same stack management that is found in other versions of Ionic Framework.

In order to handle Ionic Framework’s animations, Ionic extended the Router’s API through the ion-router-outlet component.

Ionic Vue was updated to support not only Vue 3 but the all new Vue Router.