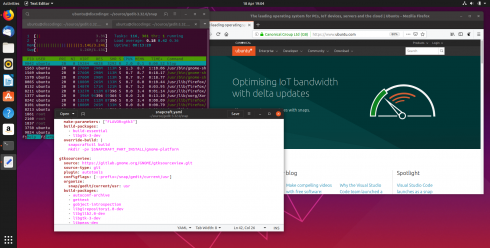 Canonical, providers of the Ubuntu operating system, released version 19.04 of its flagship product, which focuses on open infrastructure, developer desktop and IoT.

Ubuntu 19.04 integrates innovative open infrastructure projects such as OpenStack, Kubernetes and Ceph with advanced life-cycle management for multi-cloud and on-prem operations. In 19.04, multiple instances of the same snap can be installed for CI/CD, testing or phased rollouts.

“From the public cloud to the private data center to the edge appliance or cluster, open source has become the reference for efficiency and innovation. Ubuntu 19.04 includes the leading projects to underpin that transition, and the developer tooling to accelerate the applications for those domains,” said Mark Shuttleworth, CEO of Canonical.

The Zephyr Project has first Long Term Support release
The Zephyr Project, an open-source project that is working to create a real-time operating system for IoT, has launched its first long term release, Zephyr 1.14 LTS.

The customizable operating system will allow developers to choose their hardware without worrying about whether the OS will integrate with other proprietary and legacy solutions.

“The LTS will serve as the baseline for the auditable version of Zephyr, which will benefit both the maintained LTS and development branches,” said Anas Nashif, the Zephyr Project Chair of the Technical Steering Committee (TSC).

Data loading and processing is performed in Python, then handed to Javascript and WebGL for plotting. This is because JavaScript doesn’t have a mature suite of data science libraries like Python does, and it’s missing a number of features that are useful for numerical computing, such as operator overloading.

The idea for Pyodide came from working on another Mozilla project, Iodide, which is designed to perform data science computation within the browser rather than on a remote kernel, according to a post by the company.