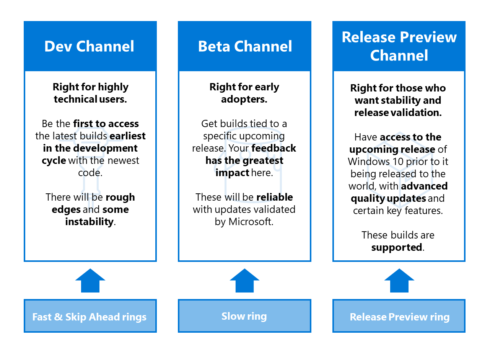 Microsoft is changing the way it releases new builds to its Windows insiders. The company introduced Windows Insider Channels to pivot towards focusing on the quality of builds and to better support parallel coding efforts.

“As we continue to evolve the way we release Windows 10 and the diversity of Insiders we serve is greater than ever, it is critical that Insiders have a flighting option that is tailored to their needs. We believe the best way to do this is to shift focus from frequency to quality,” Amanda Langowski, principal program manager lead at Microsoft, wrote in a blog post that contains additional details on the changes.

Meanwhile, the Personality Explorer provides a summary view of the personality traits of frequent shoppers across 8 eCommerce verticals, and the company stated it’s working on adding more.

Additional details on the new products are available here.

Writers of documentation should also strive to write about users in inclusive ways and avoid bias and harm when discussing disability and accessibility.

The full list of best practices is available here, although Google said the page is not an exhaustive reference.

“DynamoDB users who have experienced sticker shock from high database costs can now easily migrate to a much more cost-effective alternative, one with many more deployment options,” said Dor Laor, the co-founder and CEO of ScyllaDB. “They can also now take advantage of other open-source tools like Grafana and Prometheus.”

Other new features in Scylla Cloud include integration with popular open-source monitoring tool Apache Grafana and the ability for users to run Scylla Cloud on their own AWS accounts.