Organizations are using AI to speed up test automation 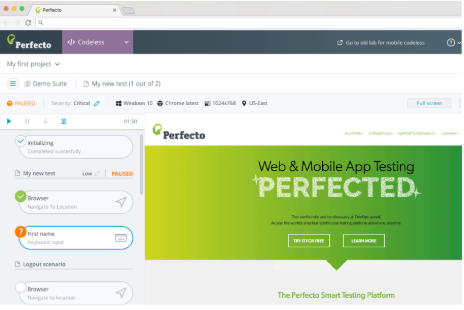 More and more businesses are looking to leverage artificial intelligence to tackle their testing initiatives and speed up development and delivery. Perfecto announced this week an AI-based testing solution for automating the process of writing test scripts.

Perfecto Codeless uses machine learning to give teams of all skill levels codeless testing capabilities. According to the company, while writing and maintaining scripts is a time-consuming task, too often teams lack the skills necessary to automate the script process.

“Across our customer base, the number one cause of automation failure is scripting issues. This a huge barrier for achieving good test automation and teams making their way towards continuous testing,” said Eran Yaniv, founder and CEO at Perfecto. “With the introduction of Perfecto Codeless, we are harnessing the power of machine learning to offer the next generation of codeless automation testing capabilities. By eliminating the need to write and maintain test scripts, teams save time and can focus on more complex tasks.”

The solution will feature smart capabilities for maintaining scripts; a connected process from creation to execution and analysis; and the ability to perform codeless test automation in the cloud.

Additionally, testing solution provide Functionize announced a $16M Series A round of funding this month to bring its natural language processing solution to enterprise-level software testing. According to the company, using artificial intelligence enables the solution to remove test churn, increase accuracy and provide a more competitive advantage. Other features of the solution include the ability to write tests in English instead of scripts, find and fix broken tests, and access to the cloud for infinite test capacity.

“Software testing has endured what I term a QA Winter,” said Tamas Cser, CEO and founder of Functionize. “This means developers and testers still maintain tests the same way as they did in the early ages of the internet. Natural language processing allows testing to just work – empowering testers to dramatically speed up product delivery.”