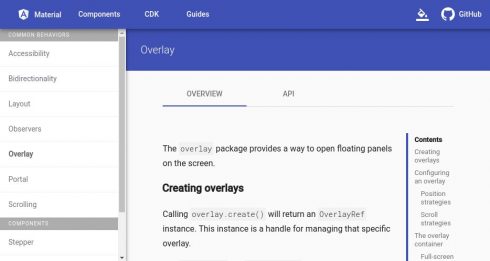 The Angular team has announced the first stable release of its Component Development Kit (CDK). The CDK was built for developers to add high quality behaviors to their components with minimal effort.

“Modern web development is all about components. Angular gives developers a way to define these discrete chunks of UI and then compose them into an application,” Jeremy Elbourn, engineer at Google on the Angular team, wrote in a post. “The Angular CDK gives developers solid, well-tested tools to add common interaction patterns with minimal effort. Whether you’re authoring a generic, reusable component library or building a domain-specific component for one app, the CDK can help you build what you need in less time with less code and fewer bugs.”

The CDK is still relatively young, but the team hopes all Angular component libraries will eventually be able to leverage the CDK. Some key subpackages of the CDK include accessibility, bidirectional text, overlay, layout, and table.

Going forward, the team will focus on building a new <cdk-tree> component, improving the positioning strategy for overlays, adding utilities and directives for drag-and-drop interactions, providing a dialog subpackage, and adding a way to inline SVGs for animation and styling.