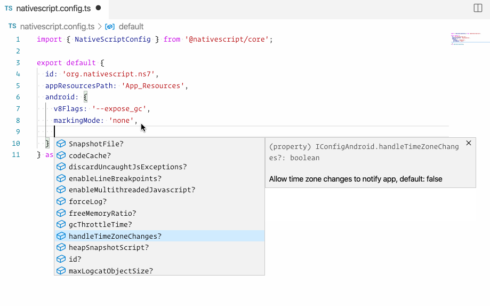 NativeScript 7.0 is now available. According to the language’s Technical Steering Committee (TSC), this release marks a significant step forward in aligning the framework with modern JavaScript standards and bringing consistency across the stacks.

In addition, the TSC noted that in this release there was a more holistic approach to managing the open-source components surrounding the framework. “This release is a testament to the effectiveness and true meaning behind the framework being community driven and governed by established open source guidelines,” the TSC wrote in a post.

In this release the language now targets es2017+ instead of es5. This allows for faster and more performant code. Developers will be able to utilize the latest ES advances, such as Nullish coalescing operator ??.

This release also adds support for the v8 iOS engine. According to the TSC, the Android runtime has been using JavaScript v8 for a while, but the iOS runtime was using JavaScriptCore. This resulted in subtle differences in how each runtime behaved. By having both operating systems use the same v8 engine, maintenance of both runtimes will be improved.

Other new features in NativeScript 7.0 include a @NativeClass() decorator and the addition of nativescript.config.ts to consolidate app configurations.

Looking forward to version 7.1, the TSC will be working on finishing remote cloud build options, adding accessibility features, expanding the framework’s use case applicability, and introducing Canvas 2d and WebGL support. More information can be found in the product roadmap here.