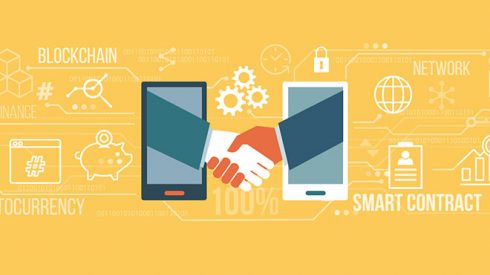 A new and emerging technology is hitting the ground running, and creating a frenzy in the industry. Bitcoin. Cryptocurrency. Initial Coin Offering (ICO). These are just some terms being seen in the headlines every day lately, but the real importance is the technology behind these terms: Blockchain.

Blockchain is a new technology that has been taking the industry by storm. Just the mere mention of blockchain can send stock prices soaring.

According to Gartner, a blockchain is “a shared, distributed, decentralized and tokenized ledger that removes business friction by being independent of individual applications or participants.”

It is the driving force behind things like bitcoin because bitcoin is a decentralized digital currency that works without a central bank or authority. It verifies transactions through network nodes and records them in a public distributed ledger. That distributed ledger is called a blockchain. “With distributed ledgers, virtually anything of value can be tracked and traded in a permanent, secure way that makes it easier to create cost-efficient business networks without requiring a centralized point of control,” said Brian Behlendorf, executive director of the blockchain consortium Hyperledger.

For instance, say you want to gamble online and you go to a gambling website run by a specific party. That is a centralized point of control. Although it is illegal, that party can technically and potentially run away with your money, explained Alok Bhardwaj, the CEO of the Epic Privacy Browser and blockchain expert. Because blockchain is decentralized, it does not require a particular party, or middleman, to be in charge of it.

To put it simply, blockchain is really just a database that is stored by a lot of people, explained Bhardwaj. “Blockchain technology is very interesting because it removes the human element,” he said. “It can make things a lot more efficient in terms of confirming a transaction and storing data. It is a way of establishing trust in a way that is more efficient than trusting a single centralized party.”

Blockchain is able to avoid a middleman through the use of smart contracts. A smart contract is a protocol embodied within the code that builds logic into the transactions. “If you build a system correctly that uses smart contracts, you can reduce your amount of code by an order of magnitude. A system that utilizes smart contracts is able to react to situations and say ‘when this happens, this is true’ and so forth. Actions get handled in the blockchain by smart objects as opposed to one monolithic system,” said  Mike Morris, CEO of Topcoder. “Blockchain is bringing the concept of trust to the Internet. It allows you to have interactions with users and have trust be a requirement of that interaction or an aspect of that interaction.”

According to Rob Bailey, founder of the blockchain accelerator company MState, a smart contract is not required for using blockchain technology, but it is beneficial in that it acts as an application logic layer for executing business rules.

While financial services is where blockchain technology stems from because of its ability to embed encryption, there has been a push to get the technology to go beyond cryptocurrencies.

“This has huge potential and implications for nearly every industry — it can be applied it to a number of things of value, whether it be financial assets, manufacturing, intellectual property, government services, supply chain management or real estate,” said Hyperledger’s Behlendorf. “Anywhere a company participates in a network of trading partners, a supply chain, a regulated market, etc., then they likely will see an operational and strategic investment in blockchain.”

Gartner predicts that blockchain will go beyond the financial industry and be applied to government, healthcare, content distribution and supply chain sectors. However, the firm notes that blockchain tools and technologies are still in early days. “Although it holds long-term promise and will undoubtedly create disruption, blockchain promise outstrips blockchain reality, and many of the associated technologies are immature for the next two to three years,” the firm wrote in its 2018 technology trends report.

By utilizing the encrypted and decentralized method of storing value and information that the blockchain provides, developers have the ability to disrupt a variety of industries, according Max Beddows, co-founder of the blockchain startup Lisk. “Developing a blockchain-based healthcare system, or a file storage database using a decentralized ledger, can significantly improve security, remove unnecessary middlemen and cut costs for consumers. Similarly, we can find blockchain applications in charitable causes. Using an encrypted ledger to track and ensure food safety in a supply chain, or enabling third world citizens easy access to a blockchain-based,” he said.

However, the problem is that there are not enough tools to help developers with blockchain technology.

“There are not enough developers in the blockchain space, and we want to fix that problem,” said he said. “If you want the technology to thrive, you need developers who are unlocking the real potential of the technology.”

According to MState’s Bailey, there are three major use cases for blockchain: cryptocurrency, supply chain or track and trace, and around the federation of consumer data.

Since blockchain technology is still a unproven and new territory, it is taking a lot longer for developers to successfully build user apps, according to Beddows. Lisk aims to change this by eliminating the hard parts of a blockchain and providing the cryptocurrency, algorithms, and network stack developers need to build applications. Over the next year, the company plans to release the first major version of Lisk Core 1.0 and an alpha version of the Lisk SDK For Blockchain applications.

“If the full potential of blockchain is realized, a world will exist which is entirely interconnected through public ledgers organized and used by AI,” said Beddows.

In addition, there are blockchain app platforms like etherum that aim to help developers build apps that run on a custom blockchain. “Ethereum is a decentralized platform that runs smart contracts: applications that run exactly as programmed without any possibility of downtime, censorship, fraud or third party interference,” according to its website.

The Hyperledger Consortium is an open source collaborative effort, hosted by the Linux Foundation, designed to advance cross-industry blockchain technologies. “Not since the web itself has a technology promised broader and more fundamental revolution than blockchain technology… Together [blockchain and smart contacts] can be used to build a new generation of transactional applications that establishes trust, accountability and transparency at their core, while streamlining business processes and legal constraints,” according to consortium.

The consortium plans to provide more educational and training content over the next year to get developers more familiar with blockchain technology.

“Technical talent that understands the inner workings of these systems are in high demand today, and we haven’t even gotten to widespread production deployment yet. This is a skill that will be highly relevant for many years to come. It’s hard to argue there is an industry that can not be touched by blockchain in some way,” said Hyperledger’s Behlendorf.

MState’s Bailey warns against getting to caught up in the blockchain hype. “It is important to not develop blockchain in a vacuum, but really focus on solving real business problems,” he said. “What we are seeing right now is what we see with the launch of any new technology. People try to use it for any use case, and a lot of them make sense, but not all do. What startups and enterprises really need to do is not just think of blockchain as a magical solution, but understand what it is and therefore the great business problems it can uniquely solve.”

The blockchain hype
Despite being a fairly new technology, the interest in blockchain is undeniable. Lately, it seems all a company needs to do is mention the word blockchain and all of a sudden its stock prices skyrocket. While blockchain has been more associated with cryptocurrencies and financial services, companies from every industry are taking hold of the movement.

“We view advances in blockchain technology as a once-in-a-generation opportunity, and have made the decision to pivot our business strategy in order to pursue opportunities in this evolving industry. We are committed to enhancing shareholder value and believe that our new focus is the best path towards this goal. We will, in the coming weeks and months, be taking a series of steps related to our efforts to assemble a world-class team of industry professionals to help us realize this vision. We are pursuing our new direction in a thoughtful and deliberate manner,” said Philip Thomas, CEO of Long Blockchain Corp.

Shortly after making the announcement of the rebranding, the company’s stock price went up more than 200 percent.

Chanticleer Holdings, a restaurant company known for its franchises like Hooters, Little Big Burger, and Just Fresh, followed Long Blockchain Corp’s move, and decided to invest in blockchain. The company announced plans to use MobivityMind, a blockchain-architected platform for commerce and customer communication, across its brands. The blockchain platform will power Chanticleer Holdings’ customer loyalty and rewards program.

“Eating a burger is now a way to mine for cryptocoins! Every meal enjoyed at any Chanticleer Holdings brand will accrue currency for the consumer that can be used for future meals or traded with other consumers. It transforms traditional consumer rewards into something that the consumer can control,” said Dennis Becker, CEO of Mobivity.

After this announcement, Chanticleer Holdings’ stock price went up by nearly 50 percent. “We wanted to expand our existing loyalty program with something that really changes the way our customers can leverage their rewards; Mobivity Merit is real cryptocurrency, leveraging the same infrastructure and principles of Bitcoin, Ethereum, Ripple, Litecoin, and more, and will enable our customers to make use of their rewards in entirely new ways,” said Michael Pruitt, chairman, president and CEO of Chanticleer Holdings.

More recently, the imaging technology company Kodak announced a partnership with WENN Digital to launch a photo-centric cryptocurrency and an image rights management platform. KODAKOne platform will utilize blockchain technology to create an encrypted, digital ledger of rights ownership for photographers to register new and archive work. KODAKCoin will enable photographers to receive payments and sell their work on a secure blockchain platform.

“For many in the tech industry, ‘blockchain’ and ‘cryptocurrency’ are hot buzzwords, but for photographers who’ve long struggled to assert control over their work and how it’s used, these buzzwords are the keys to solving what felt like an unsolvable problem,” said Kodak CEO Jeff Clarke. “Kodak has always sought to democratize photography and make licensing fair to artists. These technologies give the photography community an innovative and easy way to do just that.”

Gartner identifies emerging technologies to look into in 2021