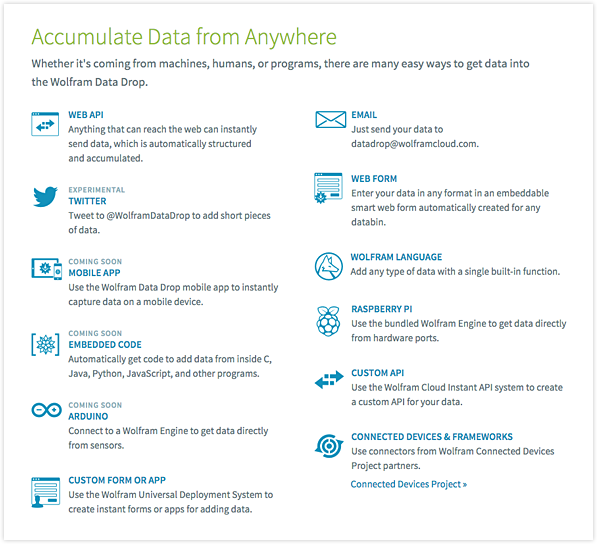 Wolfram is looking to harness data from the Internet of Things. The company recently announced the Wolfram Data Drop, a place where data from connected devices can go to be organized and stored.

“When I first started thinking about the Data Drop, I viewed it mainly as a convenience—a means to get data from here to there,” wrote Stephen Wolfram, founder and CEO of Wolfram Research, on his blog. “But now that we’ve built the Data Drop, I’ve realized it’s much more than that. And in fact, it’s a major step in our continuing efforts to integrate computation and the real world.”

With Data Drop, users can obtain data from Web APIs, Arduino, Raspberry Pi, e-mail, Twitter and more according to Wolfram. The company is already working on more ways to connect additional devices and systems.

Google announces Dart Enhancement Proposals
Google is providing a new way for the Dart team and community to work on its programming language and libraries. The company recently announced Dart Enhancements Proposals (DEP), an open, collaborative and inclusive Dart ecosystem.

DEP was designed to respond to developer needs, provide a sense of shared ownership and stewardship, and be open about the ongoing work with Dart.

“Anyone can create and champion a DEP, but this does not mean that Dart is a democracy,” wrote Seth Ladd, product manager at Google, on the Dart blog. “The DEP process is a key part of how we decide how Dart should evolve, but it’s only one part. DEPs are managed by the DEP committee.”

Report finds a high demand for Linux professionals
The Linux Foundation and Dice have released the annual Linux Jobs Report, which forecasts the Linux job market. The report revealed that almost all hiring managers are looking to hire Linux professionals in the next six months, and 97% reported they are bringing Linux talent to other skill areas.

”Demand for Linux talent continues apace, and it’s becoming more important for employers to be able to verify candidates have the skillsets they need,” said Jim Zemlin, executive director of The Linux Foundation. “Formal training and certifications are a key way of identifying qualified talent, and as more people join the Linux community, it will be increasingly necessary for professionals to show they stand out in the crowd.”