11 reasons why Android is winning 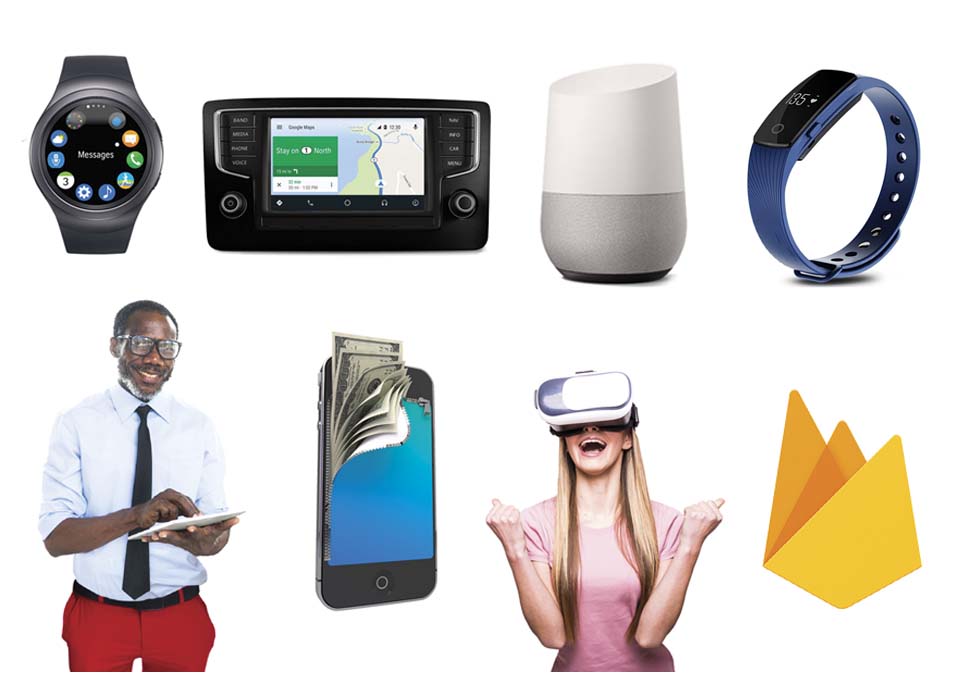 You know the smartphone has supplanted every other consumer technology when all anyone really wants in a car now is a “smartphone on wheels.” In a world where most smartphone users have Android-based models, Google is aiming to reach the next billion users coming online — with Android as the nexus of activity.

Whether it’s as a Google Home oracle/assistant, Android Auto smart car integration, TensorFlow machine learning or DayDream virtual reality, the Internet search behemoth now aims to become the search engine for your life. Add to that a serious focus on developer tooling and solutions such as Firebase and Android Studio 2.3, and it’s clear that Google is ramping its current ubiquity up to a whole new level. Here are 11 reasons why Android isn’t just for phones anymore.

“We’re finally seeing a moment in technology where a ground swell of students are graduating from college have been trained on Android—thanks mostly to its open-source nature. As a result, the industry at large is now more well-suited to do high-quality Android development,” said David Evans, CTO of Uncorked Studios and a former instructor in mobile development at the University of Pittsburgh.

“While the iPhone is still the fashion mobile device, what you’re seeing is that the development tide is turning toward Android. Google has been doing a great job with focusing their platform and developers on this, and taking it as seriously as their developer community is taking it,” he said.

“We built it with Android because it was a phenomenally powerful OS, far better than anything else out there. We were also constrained because Lytro was running on a Qualcomm solution. If Qualcomm agrees to sell you their chips, which is a big ‘if’, their software stack requires Android. If you take a Qualcomm solution, then say, ‘Let’s go to Taiwan to build this IoT device,’ they’ll say, ‘Our engineers are only trained in Qualcomm with Android.’ If you are trying to build a specialty device, Android is almost the de facto standard,” Fishman said.

Google has been banging the drum about Android Pay (formerly Google Wallet) for developers. The Android Pay API provides Java methods for the Android Pay buy button, encrypted shipping and payment, user information and making transactions. However, some find that this isn’t sufficiently flexible for their needs. Luckily for them (and, arguably, for hackers), Android’s open model offers another option.

“We at Fiserv want to build bank-branded mobile wallets. None of the three proprietary solutions — Apple Pay, Android Pay and Samsung Pay — have an open API at moment. All are branded by the parent company, and the APIs are pretty minimal. We don’t like that fact,” said Scott Hess, vice president of user experience, consulting and innovation, at Fiserv in Portland, OR.

The solution? While Apple keeps credit card information in a secure element that only the operating system can get at, “Android has Host Card Emulation, which gives developers who are certified the ability to store things on the device and leverage them to do mobile point-of-sale transactions. We’re actively exploring building HCE mobile wallets for domestic and international partners,” he said, noting that mobile payments are quite common in the UK, Australia and New Zealand, where Fiserv, a leading financial technology company, is partially based.

As creepy as the commercial for Google Home shown at last year’s I/O conference was, it’s undeniable that consumers have gotten comfortable speaking the words “OK Google” to their devices. This technology is unlikely to die an ignominious, Google Glass-style death — but it could herald the end of the nuclear family. Kidding aside, it’s a promising interface for finance, according to Fiserv: “We’re doing investigation around home banking using Google’s equivalent of Amazon Echo. You’d speak into Google Home and get your balance, for example. It’s based on Chrome OS, but it’s a similar development environment to Android phone,” Hess said.

Where Google Home could really shine is in the company’s machine learning leadership. Now, Google has open-sourced its newest machine learning library, TensorFlow, which can run on mobile. The TensorFlow repo on GitHub contains Android examples demonstrating how an app can use the camera to identify objects, among other tasks.

With the exception of Toyota, which has invested years in refining its clunky in-car navigation system and tying it to specific vehicle functions like door locks and lights, most car manufacturers are finally willing to accept Google’s market leadership with Android Auto. Now that consumers increasingly want their cars to act like giant versions of the smartphones they’ve grown addicted to, Android has an enviable position. Further, Google’s testing in this space is admirable. Finally, there’s the company’s foresight in mapping and autonomous driving technology. All these together mean Android Auto, launched in 2014 with the Open Auto Alliance, is a powerful turnkey opportunity for developers.

But so long as people are driving themselves, apps will continue to be a major distraction, creating cognitive load and increasing risk to the driver, passengers and other cars. It’s critical that Android create a new driving framework to diminish the addictive distractions and interactions that are otherwise cornerstones of smartphone app development.

At Google I/O 2016, Jeff Bush, engineering manager on the Android Auto team, promised that Android Auto would soon get Waze, OK Google and wireless capability. But the canniest thing Google has done is allow Android Auto to function as a smartphone app for older cars.

In a market that’s likely more vigorous than wearables, Android Auto will let developers participate in a new ecosystem — without causing accidents. There are different rules, of course: One requirement is that apps for Android Auto work seamlessly with input from capacitive touch screens, resistive touch screens and rotary controls.

While from the outside, the goggles look like a health and safety risk, there’s no arguing that the world of VR is intoxicating once your eyeballs can soak it in. Developed for Nougat, the seventh big iteration of Android mobile OS, Daydream is a VR platform with both hardware and software specs. Google has taken care to design an seamless, immersive experience from the moment the goggles are on: The home screen is itself VR, setting the stage for selecting games or apps using a handheld 3D controller.

The bad news about Android? It remains a growing vector for malware and malicious activity. The good news is, as with most software security issues, much protective technology is there, and developers — and consumers — just have to use it. The biggest protections come from better coding practices and layered security protocols, which are increasingly available at the device level.

“A lot of the biggest banks, as well as big tech shops like us in banking, are acknowledging that people are getting tired of passwords. No level of password is enough. That’s why we’re looking at at biometrics: fingerprints or facial recognition. We’re also leveraging geolocation — where the user would be doing mobile banking. And we’re leveraging partner technologies to check the device to know if has been rooted or if it has malware on it. Those layered security tools are in production and universal today,” said Hess.

Google continues to make ground-breaking strides towards unified web experiences, be it via progressive web apps or instant apps. Both of these techniques, while promising, are still in early days.

“We at one point were trying to minimize development effort by using non-native, hybrid apps. We were using Phonegap. We found that end users could see the difference between native and non-native — buttons go in different places, design patterns differ, you get bad ratings. We moved back to mostly native to get a better user experience. Maybe the approach going forward is, for the features I only use once a year, like changing my address, those may be ok to do in a hybrid or progressive web app fashion.”

“We looked at progressive web apps. While it does promise to reduce development efforts, I wouldn’t redirect efforts to it yet. Also, the app stores started saying, ‘If you use too much HTML in your app, we’re going to start rejecting it.’ They never said how much HTML that was,” Hess said.

“In the Android space, the device manufacturers are all over the place. We have 2000 banks and credit unions running our mobile banking platform, so we do 6000 Android releases a year, certifying all the phones, versions and operating systems,” said Hess.

With that complexity showing no signs of diminishing, it’s critical that development environments rise to the challenge. Built on IntelliJ, an open source Java IDE, Android Studio does advanced code completion, refactoring and code analysis. Android Studio 2.3 added improvements such as Instant Run, layout editor changes, WebP image format support, App Links Assistant and lint baseline mode. Google boasted at last year’s I/O conference that 92% of the top 125 Android games use Android Developer. But there are other efforts afoot to give Google a Microsoft-like developer stack, with Firebase.

Described at Google I/O 2016 as “the most comprehensive developer update we have ever made,” the aquisition and expansion of the Firebase backend-as-a-service into a unified app platform for Android, iOS and mobile web development could turn into something great — though not everyone is blown away by the new platform.

“There are a lot of competitors to Firebase. At the show floor at GDC [Game Developer Conference], there were a lot of people launching platforms for doing these things,” said Patric Palm, CEO of Swedish software project management tools Favro and Hansoft. Favro, especially, has become popular with game makers using the popular Unity Player platform.

“Unity is a good example of someone who really played the platform business right. They won. In many ways it’s more interesting what Unity did than what Google is doing. My feeling with Google is that they don’t have that loyalty to a technology that a smaller company like Unity would have.  The problem with Google is, if they aren’t successful in a space, they have a tendency to just leave it and move on to the next thing,” said Palm.

“When a company, five or six years ago, was trying to build a general app, they’d do iOS first, then go and clone it, in a very broad sense of ‘clone,’ for Android phone. That iPhone-first trend is now changing. Android is slightly easier, and there are so many developers, tools and communities to help with existing frameworks. It’s also very much proliferated in the world, with all the different phone makers. Today, it might be a better business decision to go with Android first,” said Fishman.

The potential of the DevOps fourth wave