GDC hints at future of tooling, VR and more

You could be forgiven for mistaking Game Developers Conference for a virtual reality development event: This year’s conference offered more headsets and visors than any previous show. But despite the popularity of VR headsets and augmented reality applications, the real news of the show was the lowering of price barriers around the 3D engines that drive most games.

Tools in the video-game industry have never been a big business. In the days of the Nintendo Entertainment System and DOS, most game development tools were hand-coded and purpose-built. When Frédérick Raynal was making Alone in the Dark, an influential and revolutionary 3D survival horror game released in 1992, he had to build his own viewing software for quality assurance of 3D models because those tools did not exist then.

At the Game Developers Conference, Unity announced it was bringing feature parity between Unity 5’s two versions. Those versions cost either nothing, or US$1,500 for one perpetual license. Previous versions had segmented deployment platform targets so that developers could not build their games for all platforms unless they paid for a license; that is no longer the case with Unity 5.

Unreal Engine 4, on the other hand, has gone free for users who earn less than $12,000 per year from games made with the engine. Valve Software, maker of Half-Life and Steam, announced at the show that their Source Engine 2 would be made free with no licenses required at all.

Tools to be had
The tools around these engines, and the tools for building processes around a development cycle, were also on display at GDC. Perforce was on hand to demonstrate its new distributed version-control capabilities in its Helix release. GitHub was at the show with its products, and the company hosted a major party for Ludum Dare, a worldwide association of game developers who enjoy building games in 48-hour competitions called game jams.

Codice Software, on the other hand, announced the availability of an add-on for Unity 5 that would allow developers to access source code and assets stored within Plastic SCM without having to leave Unity’s interface. Plastic SCM announced this add-on’s availability at the show, along with a new repository capability known as Gluon. Gluon allows binary assets, such as 3D art and images, to be stored inside Plastic SCM and to be version-controlled, but it removes many of the constraints that are specific to source-code control. This frees artists from having to pull down huge file sets when grabbing a single image to edit from the Plastic SCM system.

This last capability is a major hurdle for game developers, especially since Git began taking over the source-control scene. Unfortunately, Git does not deal well with extremely large assets, and the server takes a severe performance hit when repositories get over the 2GB mark. As such, the game development world requires extra attention from SCM companies like Codice and Perforce.

Another consequence of all this newfound popularity in game development tooling is that the tools are getting easier to use. Unity and Unreal Engine, for example, include point-and-click capabilities for laying out 3D scenes. The old methods of game development required artists to build in their tools, developers to build in theirs, and for anything in between to require its own custom-built tools.

The future however, is lined with point-and-click 3D interfaces. Valve Software, with its Source Engine announcement, indicated that its goal is to provide tools that are powerful enough for developers, but simple enough for the modding community to take their favorite games and change them. This requires simple tooling, as the modding communities for most games do not include many traditionally trained software developers.

Still, modding is a major source of innovation in the games industry: Counter-Strike and Team Fortress, two of the most popular first person shooters in the world, were both created as mods by players rather than by development studios. (Of course, both of these games are now major first-party titles with full-time developers on board.)

VR, AR and their ilk
As you may have noticed from watching the games industry over the past two years, virtual reality and augmented reality are coming to a console or PC near you. At GDC, Oculus, Sony and Valve all showed their newest VR headsets, but there was a new layer of entries into the field that merged AR and VR. 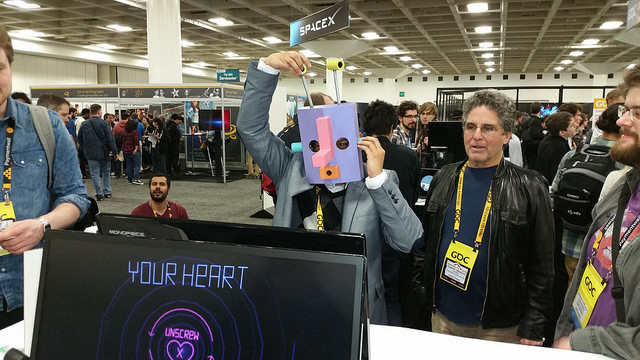 Facial features come into play with this mask. Photo by Alex Handy

Qualcomm’s Vuforia tools have been around for three years already, and the project has made quite a few waves in consumer products. LEGO’s Fusion series of toys utilizes Vuforia to integrate image recognition capabilities into a tablet application that lets kids build entire virtual towns with their LEGO set. LEGO builders can construct the facade of a store or a house, then snap a picture with their tablet. The application then analyzes the photo, generates the rest of the building’s body in 3D, and plops it onto a virtual street corner next to the other buildings the player has scanned.

Jay Wright, Qualcomm’s vice president of product management, showed off a few AR projects Qualcomm in development, including an example using the Guinness Book of World Records. Users could look at a page in the record book and see 3D images popping off of the page to illustrate busses, dinosaurs, or even a life-size model of the world’s smallest woman.

Qualcomm wasn’t the only company mixing AR and VR in their demos. For instance, the Sulon Cortex, a new headset out of Toronto, includes a positional tracker and two cameras in front of the visor. This allows users to literally walk around inside a virtual 3D space, and to pass through camera images of the real world, augmenting them with implanted images.

Easy tools don’t go away
But do all of these new gadgets and hot products really entice developers away from their beloved tool chains? The answer is: sometimes. When it comes to game developers, niche tools are still very common. For every giant studio building million-dollar triple-A titles, there are a dozen smaller operations using simpler tools that do one thing, and do it well.

One such developer is Dave Gilbert, founder of Wadjet Eye Games. His company builds old-school point-and-click adventure games, a la Monkey Island or King’s Quest. The company was founded in 2006, and has produced popular titles such as Gemini Rue and the Blackwell Mysteries series.

While the enterprise is often thought of as the place where old languages and tools never die, Gilbert’s entire company and catalog is built with a tool that was created in 1997. Called Adventure Game Studio, the tool is now open source, but it rarely sees updates. It is, quite literally, a tool that does nothing but build exactly the specific genre of games Gilbert makes.

Why not move to Unity or Source or any other now-affordable engine? While tooling in the games industry has undeniably gotten easier, Gilbert said it’s still an intimidating proposition. “Learning something new is kind of daunting,” he said.

“I won a free Unity license several years ago and never used it. The tutorials assume a basic level of knowledge about how 3D works, which I don’t have.”

And yet, he and his team are selling games all over the world. So, while game tooling has gotten simpler and more affordable, it would seem there’s still a way to go before the major commercial tools are simple enough for even non-developers to use them. That’s a shame, because Gilbert and his team are now stuck with supporting Adventure Game Studio, and that’s a large task.

When Gilbert brought some of his company’s games to iOS, for example, one update from Apple rendered all of its games non-functional. It just proves that no matter where you develop software, no matter the tools you use, keeping up with the fast pace of change in mobile is tough.