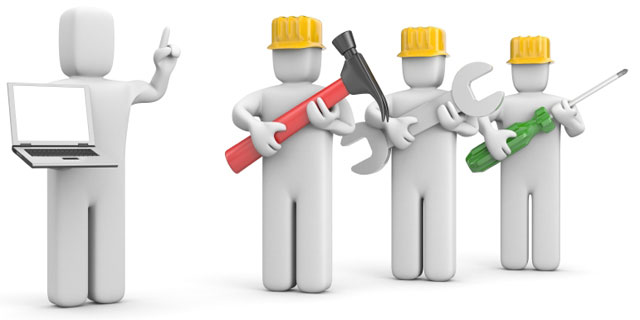 The most important change in how custom software is created these days has nothing to do with programming languages, development environments, agile methodologies or code repositories.

Instead, it’s about taking a horizontal approach to application development, which allows for shared resources, composite pieces and staying up to date. That’s the view of Matt Calkins, CEO of Appian, which recently surveyed 306 developers to get a sense of how they see their world.

“Everyone needs custom applications, but they don’t like the difficulty of doing them,” Calkins told me recently. “They expect custom applications to carry an innovation load” for the business, but instead, “custom apps are an anchor in the past.”

This is because of the vertical approach companies have always taken to software development. “In a 4GL, for example, you’d write app after app that then have nothing to do with each other. You had application silos.” Those custom applications were only accessible by the author, and Calkins said that left companies at a tremendous disadvantage. Further, he noted, the absence of alternatives to building apps from the ground up “have kept that going in spite of the level of dissatisfaction with the outcomes.”

Horizontal approaches, he said, have never been powerful enough to replace vertical app development—until the cloud. “This power parity is allowing people to think innovatively,” he said. “In a business’ non-critical areas, it’s fine to be a conformist and run pre-packaged software. That [pre-packaged software] has driven costs down and lets companies like Microsoft define how rote functions should work. Companies gain efficiencies that way. And, pre-packaged apps had an upgrade path.”

However, it’s in custom applications where businesses express their personality where they are not homogeneous, Calkins said. Unfortunately, custom applications have been seen more as a necessary evil than as a way to lead a company forward, he said. “Custom software always held you back.”

Interestingly, Appian’s roots are not in application development. They run deep into business process management. And the custom apps that businesses need to be competitive, as well as to give businessmen the access they need to corporate data, are business process applications.

In the survey, respondents cited the efficiency of software, serving a unique need, and the ability to make enhancements as the top benefits of custom software development. Ninety-one percent believe a new market is emerging for cloud-based application development platforms (spoiler alert: Appian has created a cloud-based, visual development platform).

The benefits of developing custom apps in the cloud are clear: The ability to quickly tune and make applications responsive, to reuse components in other apps, and wider ability to secure, regulate and control your applications. But perhaps the biggest benefit, according to Calkins, is in the creation of a single version of the truth.

“Now, businesses can have agreement on reviewing customer accounts and what actions can be taken, or even define what a customer is,” he said. “It’s like the second coming of data warehousing. There’s a common perception of core concepts, and this will be critical across custom software. You’ll see the same common objects the same common way, unified by a common acknowledgement of the facts of those objects.”

A platform approach to custom application development enables companies to constantly update the applications to the latest devices and operating systems, and then that information is brought to bear on the next applications, and the next. “You can be more efficient with the developers you have by accelerating and empowering them,” he said, rather than the applications becoming an albatross around the corporate neck.

With advances in the cloud and platforms that sit in the cloud, Calkins expects much more custom development will be done 10 years from now, compared to what’s happening today. “Custom software today seems to be out of date,” he said, due to the time and effort required to do updates. Platforms are “the new answer to custom software.”

As an example, Calkins described how Dallas-Fort Worth Airport published 30 custom applications—for plane inspections, facility repairs and more—in 30 weeks. “That’s like breaking the sound barrier in the world of customized software.

“This,” he added, “is the new frontier. The world is just not very good at custom application development.”