Scrum Guide updates: Back to its roots 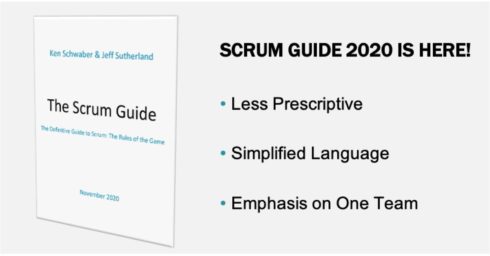 Two motivations drove the update to the Scrum Guide, which was delivered last month. The original creators of Scrum — Ken Schwaber and Jeff Sutherland — described their goals:

This release is intended by Ken and Jeff to make the Guide more usable, accessible, and inclusive.

The fight against prescription and best practice

Ultimately, with the release of the 2020 Scrum Guide, Scrum has not changed. Yes, some of the words may be different and there has been some increased clarity on topics like Definition of Done and the addition of the Product Goal, but the essence of Scrum is the same. It is a framework-based empirical process for continuous inspection and adaption. The one thing the updated Guide did was remind everyone is that complex problems make a prescriptive process difficult. Over the last several years, lots of things were added to the Guide — things that make sense, or that help adoption; but for each thing that was added there was always the risk that this prescription did not apply to everyone. Every additional sentence added complexity and potentially challenged the use of Scrum. Ultimately the Scrum Guide wants to provide a definitive description of Scrum that can be applied in every situation where Scrum makes sense to be used.

That means that the Guide has to describe the bare minimum. With the release of this version of the Guide, Ken and Jeff went back to the basics describing Scrum without the extra prescription. For example, asking the three questions at the Daily Scrum or always adding something from the Retrospective in the next Sprint might be very useful and can be used, but they should not be in the Guide as there are times that they do not make sense. Scrum is NOT a methodology, it is a framework. That means that people are required to add practices and prescriptions to make it work in their context. When solving complex problems, you don’t know everything that will happen and learn as you go, so an overly prescriptive methodology just doesn’t work.  Instead, Scrum provides a framework that allows people to add on top of, to result in a process that works in their context, for their team and organization.

It is ultimately about delivering value
With the 2020 update to the Scrum Guide, commitments were added to each artifact. These commitments provide a place to put a ‘thing’ that helps improve transparency. In the case of the Sprint Backlog, the commitment is the Sprint Goal. For the Increment, it is the Definition of Done. Both the Sprint Goal and Definition of Done were already in the Scrum Guide, though previously not directly connected to the artifact.

The addition of the Product Goal was motivated by the desire to make Scrum more usable for different contexts and to double down on the transparency required in Scrum. A Scrum Team by its very nature is formed in pursuit of something. That is universal for all Scrum Teams, immaterial of the context. By making that more explicit it will, I hope, make the use of Scrum more attractive to any team that has a goal in a complex environment. It also encourages a clearer connection between the Product Goal, the Scrum Team, and their work. This allows work to be inspected in the context of the Product Goal. This is particularly true of the Sprint Review, where the Increment is discussed. By having a Product Goal front and center at the Sprint Review, great clarity and learning is possible.

How many times have you attended a review where everyone is so focused on what is being reviewed they forgot the ultimate context? Of course, great Scrum Teams have been doing this already, but adding a Product Goal makes it more explicit.

It is Scrum, but clearer and more direct
Scrum turned 25 in October, and the first documented version was over 100 pages long. During those 25 years, it has shrunk and grown based on feedback and learning from a methodology to a framework. Elements were changed, new elements added and elements removed. But throughout that time the basics have never wavered. All you really need to remember is the simple idea of:

The framework provides the ‘dance steps’ to make it real, but then it is up to you to enhance it to meet your context.

Dave West is the product owner and CEO at Scrum.org

View all posts by Dave West