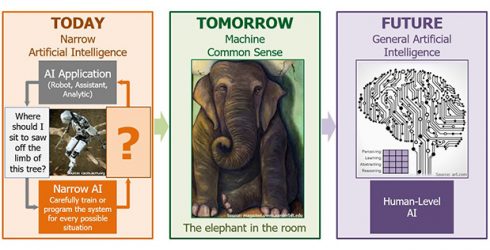 DARPA believes that possessing this knowledge could significantly advance the relationship between humans and machines, but encoding this capability is a difficult task.

“The absence of common sense prevents an intelligent system from understanding its world, communicating naturally with people, behaving reasonably in unforeseen situations, and learning from new experiences,” said Dave Gunning, a program manager in DARPA’s Information Innovation Office (I2O). “This absence is perhaps the most significant barrier between the narrowly focused AI applications we have today and the more general AI applications we would like to create in the future.”

DARPA has created the Machine Common Sense (MCS) program in order to address this issue. MCS will explore advances in cognitive understanding, natural language processing, deep learning, and other areas of AI research.

The first approach will be to create models that think and learn as humans do in early development stages. The researchers will utilize advances in the field of cognitive development to provide guidance.

“During the first few years of life, humans acquire the fundamental building blocks of intelligence and common sense,” said Gunning. “Developmental psychologists have founds ways to map these cognitive capabilities across the developmental stages of a human’s early life, providing researchers with a set of targets and a strategy to mimic for developing a new foundation for machine common sense.”

The second approach will be to build a common sense knowledge repository that can answer natural language and image-based queries by reading from the web. DARPA hopes that researchers will use a combination of manual construction, information extraction, machine learning, crowdsourcing techniques and other computational approaches when creating this repository.