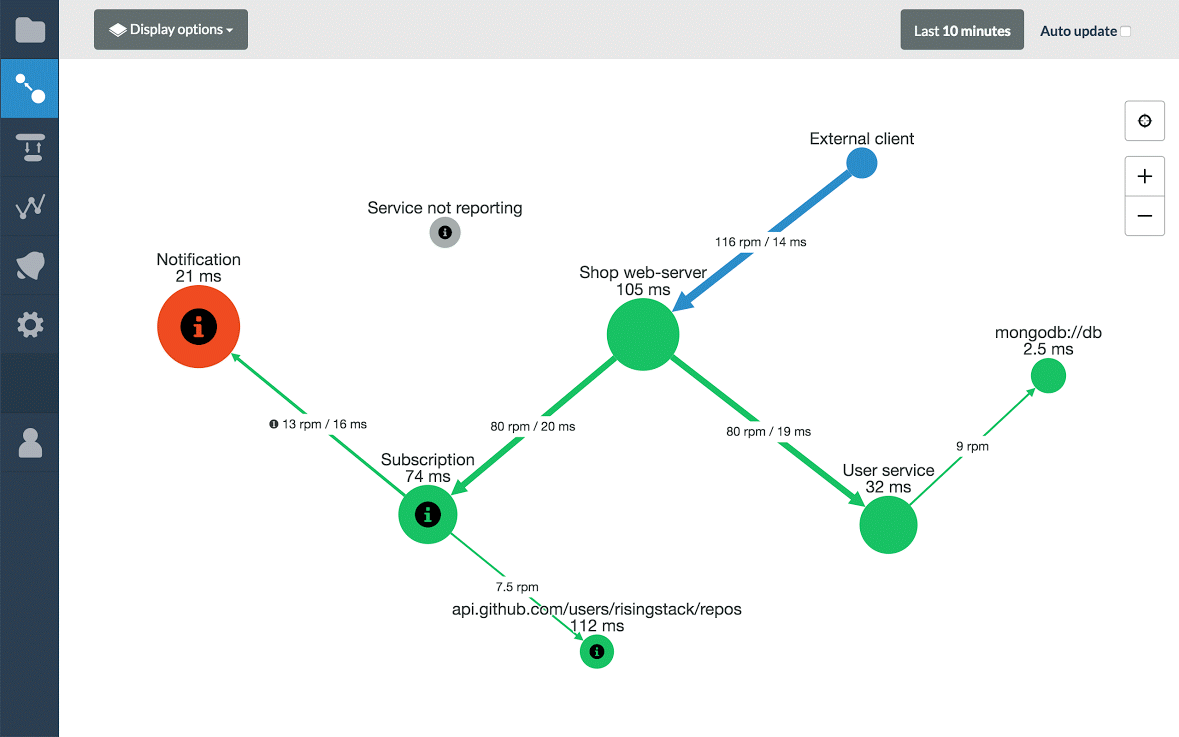 Trace allows developers to automatically localize ongoing issues and debug distributed systems. The tool aims to address some challenges that teams face when working with microservices. These challenges include transaction tracking, monitoring, alerting and visualizing infrastructures. The platform also displays logs together from several microservices grouped by a correlation ID, according to the company.

“Tools with basic metrics and alerting functions have been around for a few years; still, monitoring and maintaining a microservice architecture remained challenging,” said Gergely Nemeth, CEO of RisingStack. “Debugging is hard, it’s easy to lose track of services when you deal with a lot of them, and it’s painful to detect bottlenecks with the existing solutions. Trace can help with all of these issues while avoiding the microservice jungle.”

Trace runs on any IaaS or PaaS environment like Amazon AWS, Cloud Foundry, DigitalOcean or Heroku. By adding a few lines of code to an application, Trace can be installed.

Four workshops that will be cohosted by academic and nonprofit groups, and two of them will be cohosted by the National Economic Council. Anyone interested in this technology is invited to these workshops. Topics include AI for social good, safety and control for AI, and more. Each workshop will also be livestreamed.

In addition to the workshops, the federal government is also working to leverage AI for the public good and toward more effective government, according to the White House blog. A new National Science and Technology Council (NSTC) subcommittee will meet this week to discuss machine learning and AI.

Coding Dojo’s new corporate training program
A new series of courses with Coding Dojo are designed to help companies make sure their developers are updated on all the latest programming languages. The new program is called the Corporate Training Program, and it also offers a structure that companies can use to teach their non-developer employees how to code.

Coding Dojo offers onsite and online options for the Corporate Training Program. Teams will be trained in specific languages, learn about Web security, Web scalability, front-end development, back-end development, and database or framework development. There will also be Web fundamentals courses covering HTML, CSS and Git, which will be offered to non-technical employees like marketing and product managers who could benefit from coding skills.

“Over the past four years we’ve developed and refined an online learning-management system that can be customized for corporations,” said Martin Puryear, a lead instructor and principal engineer at Coding Dojo.

Companies can start training their internal employees today with the Corporate Training Program, as well as other Coding Dojo developer courses that are available.

The organization is focusing on CEOs and management of early to mid-stage startups, providing resources like research, frameworks and recommendations so companies can make sure they are giving all individuals a “fair shot at success,” according to the project’s website.

Project Include has a set of customizable recommendations for CEOs, leaders and managers that they can use to increase diversity and inclusion within their organizations. Some of these recommendations include employee life cycle, implementing culture, training, and resolving conflict.

Appeals court decision brings trouble to app developers
Last week, there was a win for privacy rights advocates when the U.S. Court of Appeals for the First Circuit handed down its decision in Yershov vs. Gannett.

The ruling found that USA Today can be sued under the Video Privacy Protection Act (VPPA) for collecting and sharing personal information with a third-party data miner without consent from plaintiff Alexander Yershov. Yershov used the mobile app for USA Today to view video clips, and the Appeals court ruled that someone who uses a free app is a “subscriber” under the VPPA. This is the first time an appellate court has made this kind of ruling, since the court recognized that device identifiers (like a smartphone’s ID code) can be considered Personally Identifiable Information, which would increase liability for other mobile app developers.

The full court ruling can be read here.

Bitcoin for developers
21 is an app, a marketplace, a network and library, with the ability to help developers earn bitcoins on every HTTP request.

Developers can get started by installing 21 (currently in beta) on any Internet-connected device. It can then be used to build, buy and sell machine-payable apps with developers all over the world.