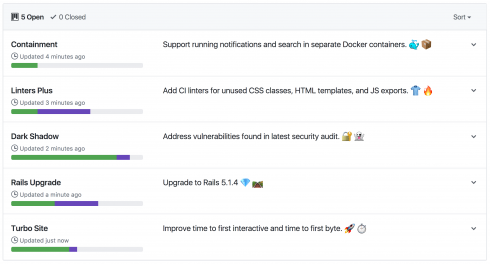 GitHub has added the ability to visually track the progress of developer projects. With this update, developers can track the to do, in progress, and done cards. Developers can also now track project boards from other repositories and organizations in a more in depth way. According to the company, this enables users to easily create summary cards for other projects, which will update manually.

Rust 1.23 released
The latest version of the systems programming language Rust is out. Rust 1.23 features many new improvements. It now avoids unnecessary copies, and has moved rustdoc to CommonMark.

Developers no longer need to use the AsciiExt trait to provide ASCII functionality as those methods are now defined directly on those types. There are also now more stable APIs. For a complete set of features, visit its website.

Hyundai and Volkswagen partner up with self-driving technology company
Both Hyundai and Volkswagen are partnering with the self-driving technology company, Aurora Innovation. The goal of the partnership with Hyundai is to create level 4 autonomous vehicles and bring them to the market by 2021. Level 4 vehicles are those which can operate without human input or oversight under certain conditions.

The partnership with Volkswagen will bring self-driving vehicles to cities as Mobility-as-a-Service fleets.

“Our priority at Aurora is to make self-driving cars a reality quickly, broadly and safely, and we know we will get there faster by partnering with innovative automakers like the Volkswagen Group,” said Chris Urmson, CEO of Aurora. “This partnership establishes a deep collaboration using Aurora’s self-driving technology, and together we will bring self-driving vehicles to market at scale.”

Amazon announces new ways for developers to deliver Alexa products to their customers
Amazon announced two new ways for developers to implement Alexa in their products. The Alexa Mobile Accessory Kit will allow Alexa to be connected to Bluetooth-connected devices such as headphones, wearable audio devices, smart watches, and fitness devices. By placing Alexa on these devices, customers will be able to use the AI assistant without needing to be connected to Wi-Fi or use their phone. It also announced the Amazon Alexa Premium Voice Development Kit, which allows developers to create high quality voice experiences in their products.