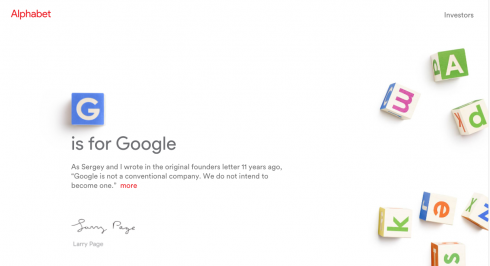 Alphabet Inc. has announced that Eric Schmidt will be transitioning from being the Executive Chairman of the Board of Directors to a technical advisor to company as well as serving on the board.

“Since 2001, Eric has provided us with business and engineering expertise and a clear vision about the future of technology,” said Larry Page, CEO of Alphabet. “Continuing his 17 years of service to the company, he’ll now be helping us as a technical advisor on science and technology issues. I’m incredibly excited about the progress our companies are making, and about the strong leaders who are driving that innovation.”

Instagram open-sources its MonkeyType tool for Python 3 code
Instagram announced it is open-sourcing its MonkeyType tool. MonkeyType uses runtime type tracing in order to automatically add type annotations to Python 3 code. The company has hundreds of engineers collectively working on over a million lines of code. It is constantly shipping new code into production so the company needed a way to make code easier for developers to read and understand, in addition to reducing the amount of potential bugs.

“With MonkeyType’s help, we’ve already annotated over a third of the functions in our codebase, and we’re already seeing type-checking catch many bugs that would have otherwise likely shipped to production,” Carl Meyer, engineer at Instagram’s infrastructure team, wrote in a post.

Rust reviews its goals for 2017
Rust has released its year in review, going over some of the goals it met in 2017. It lowered the learning curve for the language by making books, courses, and improving the language. It also made a more please edit-compile-debug cycle by adding in a check workflow and utilizing incremental recompilation. Other goals included having a solid and basic IDE experience, easy integration into large build systems, easy access to high quality crates, being able to write robust servers, 1.0-level crates for essential tasks, and a community that provides mentoring at all levels.

“This is a big win for our customers,” said James Stansberry, Senior Vice President and General Manager of ARTIK™ IoT, Samsung Electronics. “Not only can they get to market faster with our production-ready, secure system-on-modules, but they can leverage ARTIK™ OCF and radio certifications to ensure that their products will work together.”