More information about Python Tools for Visual Studio 2.1 is available at CodePlex.

“The Digital Service will work to find solutions to management challenges that can prevent progress in IT delivery,” according to the White House Blog. “To do this, we will build a team of more than just a group of tech experts—Digital Service hires will have talent and expertise in a variety of disciplines, including procurement, human resources, and finance.”

In addition, the White House also released a Digital Services Playbook that lays out best practices for building Web and mobile applications, and will serve as a government agency guide. 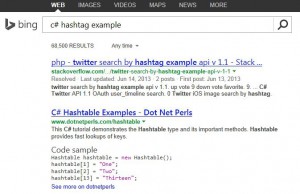 “Our work with Amazon creates a cloud- and mobile-friendly developer ecosystem that gives these developers the ammunition they need to create the quality, forward-looking applications businesses require to survive and thrive,” said Andi Gutmans, CEO and cofounder of Zend.

Zend Server provides developers insight into how their code is functioning as they develop it without having to change their workflow. Zend Server 7 will be available on AWS through three editions: Developer, Professional and Enterprise.

The Splunk App for Stream is designed to capture wire data (machine data transmitted between applications over networks). Once deployed, the app collects, aggregates and filters wire data from endpoints including virtual machines and routers for analysis.

For more information, the Splunk press release is available here.