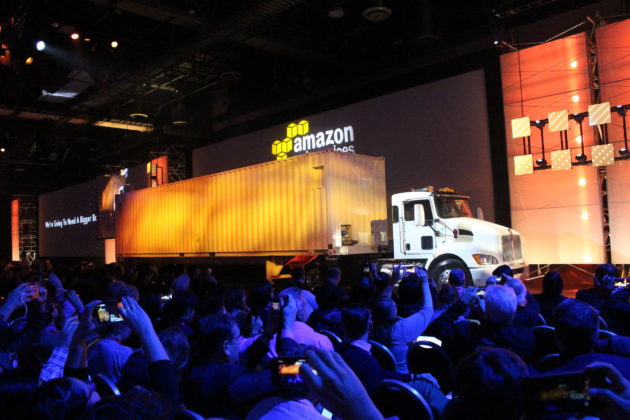 Amazon customers are constantly looking to move data (and lots of it), which is why the company used this year’s Amazon re:Invent conference to extend the capabilities of Snowball, a device that allows customers to move 50 terabytes of data out of data centers and into the AWS cloud.

After last year’s announcement of Snowball, customers with exabyte-scale on-premise storage realized that all-out data migrations still require many devices and a lot of time. According to Jeff Barr, chief evangelist at Amazon Web Services, “Moving large amounts of on-premises data to the cloud as part of a migration effort is still more challenging than it should be. Even with high-end connections, moving petabytes or exabytes of film vaults, financial records, satellite imagery, or scientific data across the Internet can take years or decades.”

(Related: How to deal with data at scale)

Amazon’s newest solution extends Snowball boxes so customers can move even more data to AWS in less time. It’s called AWS Snowmobile, and it is a secure data truck that stores up to 100 petabytes of data. It attaches to a network and shows up as an NFS-mounted volume that can be used to meet the needs of customers, like for those in the media, entertainment and science industries.

AWS Snowmobile fits this truck’s name, because physically it is a “ruggedized, tamper-resistant shipping container 45 feet long,” wrote Barr. It’s a little over 9 feet high and 8 feet wide and ready to be parked outside in a covered or uncovered area adjacent to a data center. For customers who do not have enough capacity on site, Amazon will arrange for a generator, wrote Barr.

The addition of AWS Snowmobile allows customers to run the newly announced AWS Greengrass solution, which builds on the company’s IoT and Lambda services. It aims to help users securely run local compute, messaging and data caching for connected devices, and it extends AWS to devices so customers can generate data that they want to locally, while still using familiar languages and programming models.

“Lots of interesting and potentially valuable data is present out in the field; if only it could be collected, processed, and turned into actionable intelligence,” wrote Barr in another blog post. “This data could be located miles below the surface of the Earth in a mine or an oil well, in a sensitive and safety-critical location like a hospital or a factory, or even on another planet.”

The core runs on devices with “at least 128MB of memory and an x86 or ARM CPU running at 1GHz or better,” said Barr. The SDK allows users to build apps to run on devices and capture data.