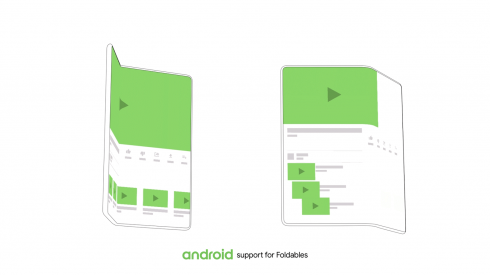 Google is looking to support the latest technologies in a series of new Android developer updates and features announced at its Android Dev Summit in Mountain View this week.

Support for devices with foldable screens
Android device makers are beginning to experiment with Foldables, which are screens that can bend and fold. When folded, the devices look like normal phones, but when unfolded the screen size is more similar to a tablet’s screen size. When unfolding, apps seamlessly transfer to the larger screen, Google explained.

The Android team is now working on optimizing Android for Foldables. It is also working to provide ways for developers to utilize them to create new experiences.

Support for Kotlin 1.3
The company announced that features of Kotlin 1.3, which was released last week, will be integrated into Kotlin-specific APIs.

New features include inline classes, unsigned numbers, and coroutine support. Multiplatform code that was previously written for Android or JVM can now target JavaScript and Native, allowing more parts of codebases to be reused on other platforms.

WorkManager offers a way to perform background tasks efficiently, selecting the proper solution based on the application state and device API level.

Android Slices are moving to public Search experiments as well. Slices are mini parts of apps that can show content and actions, allowing users to do things such as book a flight, play a video, or call a ride.

Android Studio 3.3 beta 3
Android Studio 3.3 has entered beta 3. The Android team has stated that there will be a strong focus on quality and fundamentals in the upcoming releases. It wants to focus on reducing the number of crashes, optimizing memory usage, and fixing user-impacting bugs.

It also announced that Android Studio will become an officially supported IDE on Chrome OS next year.

According to Google, apps save an average of 35 percent in size compared to a universal APK.

“With dynamic feature modules, you can load any app functionality on demand instead of at install time. You don’t need to keep big features that are only used once, on every single device forever; dynamic features can be installed and uninstalled dynamically when your app requests them,” the Android development team wrote in a post.

The API will have two options:

Instant app improvements
It is also making it easier to adopt instant apps. Recently, it made using web URLs optional and raised the size limit on instant apps to 10MB for the Try Now button in the Play Store and web banners.