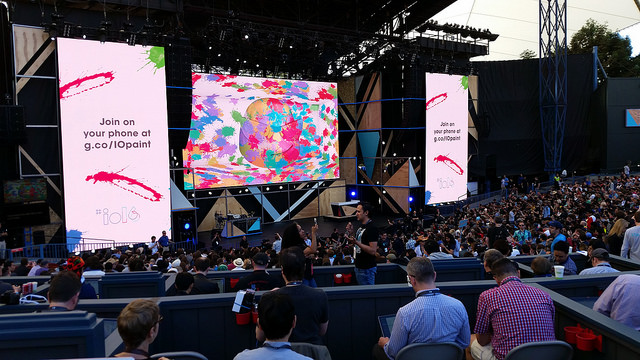 It wouldn’t be Google I/O without a healthy dose of Android news to discuss, and this year’s event, though vastly different in appearances, still contained numerous new tidbits on Android N and the future of the mobile device platform.

Dave Burke, vice president of engineering at Google, took the stage to discuss the company’s mobile platform. For Android N, he said, the team set about rewriting how a lot of the fundamental systems work.

“This year we decided to do something a little different,” he said, “by releasing an early developer preview of Android N before Google I/O. Getting the platform out earlier means there’s more time for app makers and hardware developers to be prepared for the release later this year.”

And if you’re wondering why Android N is still just called Android N, that’s because the team has hit a logjam on the naming conventions. “This year the ‘N’ dessert name is proving trickier than all the others, so for the first time ever, we’re going to ask the world to give us their ideas,” said Burke. “Please don’t call it Namey McNameface. We reserve the right to pick the winner.”

Burke detailed some of the improvements in Android N, most notably: “improved performance in graphics. We’ve already extended OpenGL to bring the experience to mobile. With N we make a leap forward with the introduction of Vulkan. We made a concerted effort to work with the industry on Vulkan. Game developers are able to squeeze in more effects per frame while keeping framerates high.”

The Android runtime has also been improved, said Burke. The compiler now performs anywhere from 30% to 600% faster on benchmarks, he said. Add to that the improvements inherent in the new just-in-time compiler, and he said that applications not only install faster, but can also be fit into half the storage space.

Other changes to the operating system include new security features, such as file-based encryption, which supplants whole-disk encryption as an even more secure means of keeping data safe from prying eyes.

Google’s security fixes for Android also extend to the ecosystem and Play Store, said Burke. “Let’s not forget all the security services Google provides to keep all Android devices safe,” he said. “Safe browsing warns users ahead of time about sites that contain malware or are deceptive. In the Google Play store, we review every app to make sure it meets our policy. We run an app security improvement program with developers. We worked with key banking and ecommerce apps to make sure they were using https properly to prevent man in the middle attacks.”

From an interface perspective, Android N adds the ability to have two apps open at once, side-by-side, and to automatically move to the last application used after a double tap of the “recent” button. For larger devices, like Android TV, picture-in-picture support is also included.

Notifications are also getting an overhaul, with the ability to configure notification options by tapping on an app’s message in the status bar. Messaging notifications will also get more interactive with quick-send responses included in pop-ups.

Android N also includes Java 8 language support, meaning developers will be able to use Lambdas on Android for the first time. The Android team released a beta with all of this functionality today.

Clay Bavor, vice president of VR at Google, then took the stage to introduce Daydream, a new specification and brand for VR on Google’s platforms. The Daydream specification will list what is needed to have full-quality VR on a phone, with no lag between head movement and image movement. Phones and headsets that meet these specifications can be labeled Daydream-ready.

The Google Play Store will also be in VR for VR users, with a separate 3D dashboard for finding and running applications. Bavor also said that Google will continue to promote Cardboard for Android, though it will be introducing headset specifications for Daydream standalone devices.

David Singleton, vice president of engineering at Google, then announced Android Wear 2.0, the first revision of that platform to support standalone devices. With Android Wear 2.0, watches can be worn without phones, provided they include WiFi or cellular modems.

Watch faces in Android Wear 2.0 can now display more information than just the time and date, as notifications and iconography can be added by watch-face developers. Finally, Android Wear 2.0 devices can automatically detect when the user begins working out, and can track biological data without needing to be triggered by the user. A preview of Android Wear 2.0 is available today.

Android Developer Studio 2.2 was shown off next, as Stephanie Saad Cuthbertson, product management director for Android at Google, told the assembled developer masses that, on top of vast speedups for build times in Android Studio 2.1, version 2.2 will be even faster.

Released this morning, Android Studio 2.2 adds test recording, so developers can look through their applications while recording the actions. These steps are recorded and encoded in the Espresso test language, producing a replicable and reusable test for any Android application.

Saad Cuthbertson then explained that layouts are getting a major update as well. “You can build layouts faster and they’ll run faster too. We have a rewritten, feature-rich layout designer with new constraint layouts. We auto-add all the constraints for you. The UI is now going to adapt on different Android devices and orientations. Your app will run faster too,” she said.

“Building a rich UI in Android usually requires nested layouts; with constrained layouts there’s no nesting required. Also, 2.2 includes a new APK analyzer, to figure out what’s making my app so big,” she said, adding that there is also a new layout inspector for helping developers to find problems in their UI.

Firebase is a major part of Google’s Android pitch now, and today the company announced improvements to the platform that will increase its ability to help developers track and analyze the usage of their applications. Firebase is a free tool that connects to Google’s Cloud Platform.

Developers looking to support Android Instant Apps must first divide their applications’ code into modular sections, a process Powers said can take a day or two depending on how the code is structured.

Once completed, apps can then load with the tap of a URL in the browser. Thus, content hosted within a specific app can be viewed quickly and without installing the application. If users wish, they can quickly install the application in question by tapping a prominently placed install button at the top of the screen.

Powers said this capability will go live later this year, and that it is compatible with Android operating systems all the way back to Jellybean.

Google I/O continues on to Friday.