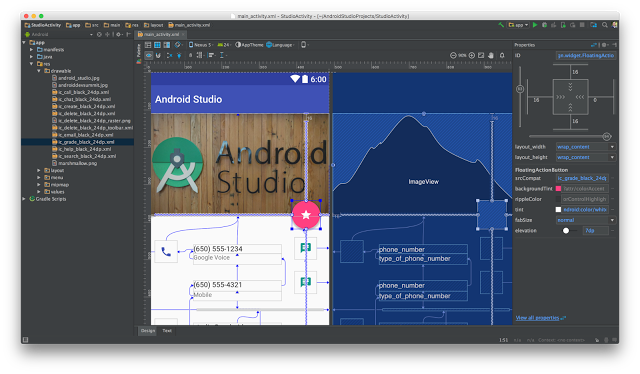 Google announced the stable availability of Android Studio 2.2 today, the latest release of its IDE for Android developers. This release comes with a few major enhancements, including evolved Android Frameworks, a new layout manager, and a few beta features.

According to Jamal Eason, product manager for Android, this release has three major themes: speed, smarts and support for the Android platform. There are more than 20 new features across every phase of the development process, including design, development, building and testing.

To start, the Layout Editor includes a new user interface designer, which lets developers quickly construct the structure of their app UI with the new blueprint mode. Developers can adjust the visual attributes of each widget as well using the new properties panel, according to the Eason.

Developers will see improved C++ support, and they can use CMake or ndk-build to compile their C++ projects right from Gradle, wrote Eason. Developers can find support for C++ in the new project wizard of Android Studio, as well as bug fixes. Also for the developing stage, developers will see Jack Compiler improvements, Java 8 language support, a merged manifest viewer, OpenJDK support, and a build cache. The build cache can speed up build times by storing and reusing files/directories that were created in previous builds of the same Android project. That feature is currently in beta.

There are now a new set of virtual sensor controls in the Android Emulator, and with its new UI controls, developers can test Android Sensors like Accelerometer, Ambient Temperature, Magnetometer, and others.

Two other tools are in beta with this release, including the Espresso Test Recorder and the GPU Debugger. The Espresso Test Recorder lets developers create UI tests by recording the interactions with their app, and then it outputs the UI test code. Test can be run locally or on a continuous integration server, or by using Firebase Test Lab for Android.

The GPU Debugger is also in beta. It allows developers to capture a stream of OpenGL ES commands right on an Android device, and then replay it instantly from inside Android Studio for analysis, according to Eason.

For developers that want to get started with this new version of Android Studio, they can do so by downloading it from the official page. Also, developers should update to the Android Gradle plug-in version to 2.2.0 in their latest app project, according to Eason.