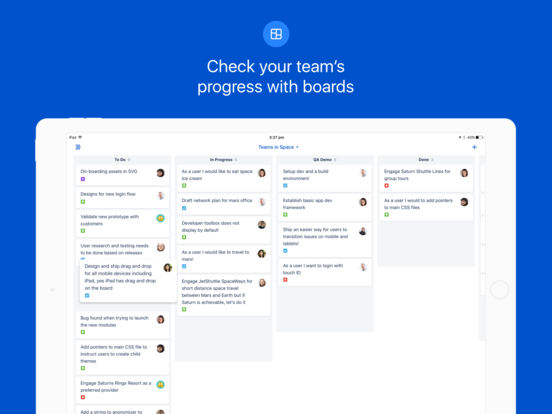 Atlassian launched JIRA Cloud for iPhone a year ago, and today, it announced that the wait is over for JIRA Cloud for iPad. JIRA Cloud for iPad is available now, and it comes with mobile functionality, more spacious and contextual boards, a redesigned and split screen backlog view, and the ability to filter by team member.

A popular feature of JIRA Software is the filters since it lets teams see what other team members are working on. JIRA Cloud iPad comes out-of-the-box with filter support for team members, which means users will have the same JIRA Cloud web experiences on their iPad.

Users will also be able to swipe to navigate boards with more complex workflows, see all the important contextual information, and add items to an upcoming sprint with a swipe. More information is available here.

Chromium says goodbye to PNaCI
In order to continue the momentum of cross-browser support, the Chromium team announced that it will focus its native code efforts on WebAssembly moving forward. The team will remove support for PNaCI in the first quarter of 2018 everywhere, except inside Chrome Apps and Extensions.

To help with this transition, the team provided some recommendations for existing PNaCI implementations to migrate to a web platform. The team also listed a roadmap for WebAssembly.

“We believe that the ecosystem around WebAssembly makes it a better fit for new and existing high-performance web apps, and that usage of PNaCl is sufficiently low to warrant deprecation,” reads a Chromium blog.

GitHub introduces temporary interaction limitations
GitHub is giving repository maintainers a new way to handle comments and pull requests, especially when things start to get heated. The organization is providing temporary interaction limits. This new capability enables the maintainer to temporary limit comments, pull requests and open issues. The limitations will last 24 hours, and then allow users to continue participating in the conservation.

“When issue or pull request discussions get heated, sometimes a solution can’t be reached until everyone has had time to cool down,” Lindsey Bieda, GitHub staff member, wrote in a post.

Qt 5.9 released
The Qt team announced that Qt 5.9 has been released. Qt 5.9 focuses on performance and stability, and much work has been done to improve Qt’s continuous integration system. The new enhancements will make it easier for the Qt team to create new releases, both patch level and minor releases.

According to a Qt blog post, the team also added automated performance regression testing to its testing infrastructure, which will allow it to continuously monitor the work on improving the performance of Qt. In addition to this release, the team wrote that the new configuration system used in Qt Lite has received many bug fixes.

According to the team, Forms are an integral part of the PDF workflow. With this release, the new Forms architecture already shipped on iOS with PSPDFKit 6.5 for iOS and it will soon be available for PSPDFKit for the web. The team also introduced support for additional PDF actions with this 3.0 release for Android. Specifically, the team added support for HideAction, SubmitFormAction, and ResetFormAction. The default ActionResolver has been revamped, and now it has the ability to execute chained actions.

Other changes include the improved naming of classes, the static openDocument methods moving from the PSPDFKit class directly onto the PdfDocument, and RxJava was updated to version 2.