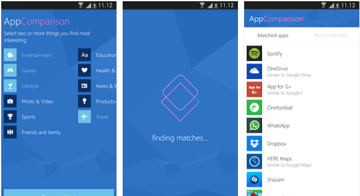 Microsoft is looking to entice Android users to switch to Windows Phone with a new tool. AppComparison is a Google Play app designed to list which Android apps are available on Windows.

“Are you considering changing your Android device to Windows Phone? AppComparison identifies your favourite Android apps and matches them with apps available from the Microsoft Store. The application also introduces you to some of the most popular Windows Phone applications,” according to the Google Play website.

Python’s newest release
As of today, Python 3.5.1rc1 is available, and it is the first update for Python 3.5, which is the newest version of the Python language, according to an announcement.

Some of the changes include improved Python zip application support, additional unpacking generalizations, and making the Windows Python launcher aware of virtual environments.

There are now Web-based installers for Windows platforms, where the installer will download the needed software components at installation time. For OS X users, the OS X installers are now distributed as signed installer package files compatible with the OS X Gatekeeper security features, according to the announcement.

“In the consumer market, a free upgrade coupled with broad legacy device support and automatic over-the-air upgrades ensures that there will be tens of millions of users familiar with the operating system before the end of 2015,” said Steve Kleynhans, research vice president at Gartner. “For enterprises, we expect that implementation will be significantly more rapid than that seen with Windows 7 six years ago.”

Other findings included that, by 2019, organizations will deliver twice as many apps remotely compared to 2015, and by 2018, 30% of enterprises will spend more on display screens than PCs.

Volvo eyes holograms
Volvo has announced it will be working with Microsoft to develop the next generation of automotive technologies. The two companies will look into bringing Microsoft’s HoloLens, its holographic device, to its cars. The companies will research how the HoloLens can be used to examine a car virtually.

“We are thrilled to be working with Volvo Cars to reimagine what is possible in car design, discovery and purchasing,” said Scott Erickson, senior director of HoloLens at Microsoft. “We are excited to be at this intersection of technology and human-centric design with Volvo.”

HP Enterprise has new solutions for Docker
Hewlett Packard Enterprise (HPE) has new solutions built for the Docker ecosystem. These solutions span cloud, software, storage and services. According to First Post, these technologies are designed to help organizations leverage Docker, and they include:

A full list of solutions can be found here.