The most popular open-source cloud projects of 2014 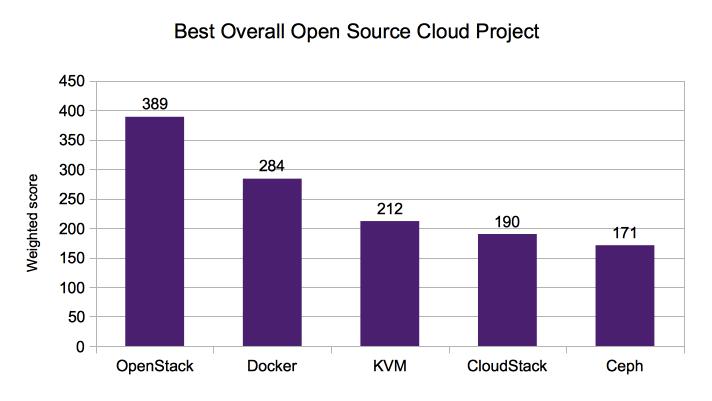 When it comes to open-source cloud projects, OpenStack is on top, according to a survey conducted by the Linux Foundation and analysis organization The New Stack. While the open-source software for building private and public clouds is only 4 years old, the results aren’t too surprising. The project has received support from leading industry giants such as HP, IBM, Red Hat and VMware.

“OpenStack had the most contributors weighing in on the survey and has been growing quickly,” wrote Alex Williams, founder of the New Stack, on Linux.com. “Fewer respondents said they contribute to Docker, but it’s the project everyone said they want to contribute to more.”

Following OpenStack and Docker in the best overall category were KVM, CloudStack and Ceph.

In the Hypervisor and Container project category, KVM, Docker, Xen Project and CoreOS led the group. OpenShift and Cloud Foundry dominated the PaaS category; and OpenStack continued to led the projects in the IaaS category, with CloudStack, OpenNebula and Eucalyptus following.

Puppet, Ansible, Salt, Juju and Chef were among the top projects in provisioning and management tools. And Ceph, Gluster and Swift led the storage projects.

“OpenStack and Docker will continue to dominate the open-source cloud discussion,” according to Williams. “But Docker may prove to gain the most as it is also breeding a diverse ecosystem of open-source projects. OpenStack is primarily contained (no pun intended) to the development of its own cloud operating system.”

The survey gathered information from more than 550 respondents over a two-week period in July, and the results were announced at CloudOpen North America, a Linux Foundation trade show earlier this week.