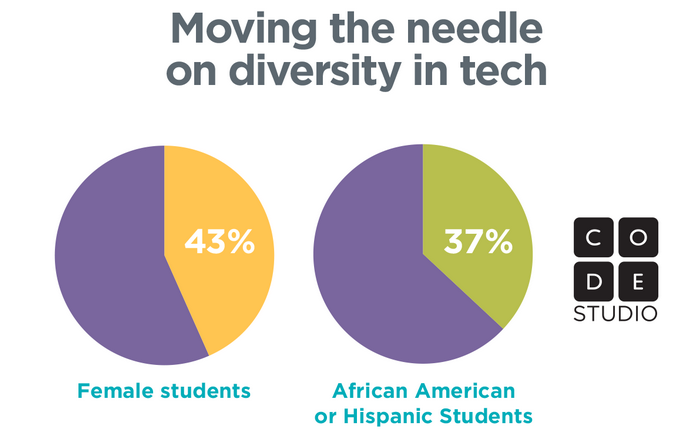 Code.org has revealed a milestone with its computer-science learning platform, Code Studio. The organization announced that more than 1 million girls, along with 1 million African-American and Hispanic students, have enrolled in Code.org’s computer-science education program.

“We all know tech has a diversity problem. The problem in computer-science education is even worse. To work to solve both problems, we’re giving kids the chance to start learning young,” the organization wrote on its blog.

According to Code.org, the news is a big because only about 550,000 women in the U.S. are software professionals, and only a few thousand women, African-Americans and Hispanic students graduate with a computer-science degree each year.

CodeNow takes on new approach to teaching code
CodeNow has announced a new program to teach more students how to code. The organization has created a “plug-and-play” initiative, CodeNow in a Box, to help technology companies host their own computer programming workshops. Under the program, CodeNow will provide companies with tools, training and best practices.

In addition, CodeNow has announced Bloomberg as its first partnership for CodeNow in a Box.

“We are thrilled to embark on this next leg with Bloomberg as they join us with CodeNow in a Box, and look forward to developing this partnership to empower high school students across New York City with life-changing programming skills. We hope other companies follow suit to help us equip thousands of students around the nation with this valuable skillset,” said Ryan Seashore, CEO of CodeNow.

More information about the program is available here.