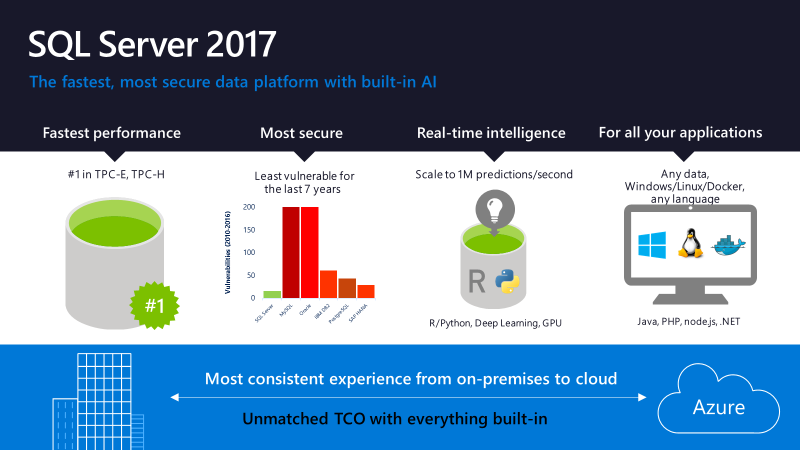 Starting today, developers can download the SQL Server CTP 2.0, which is available on Windows, Linux, and Docker. This is a preview release in which Microsoft introduces in-database support for libraries of machine learning functions. For the first time there is Python support, in addition to R support. SQL Server 2017 can also leverage GPU computing through Python/R interfaces to power deep learning, according to Microsoft.

Another big release is the Microsoft R Server 9.1, which takes the concept of “bringing  intelligence to where your data lives to Hadoop and Spark, as well as SQL Server,” according to a blog by vice president of the Microsoft Data Group, Joseph Sirosh.

Microsoft also announced that the Face API, Computer Vision API, and Content Moderator are now generally available in the Azure Portal. These APIs add different types of intelligent and cognitive services to applications. For instance, the Face API detects and compares human faces, and identifies previously tagged people in images. The Computer Vision API can now detect landmarks and handwriting in images, and handwriting detection remains in preview.

According to Sirosh, Microsoft has incorporated technology that sits behind the Cognitive Services inside U-SQL directly as functions, so developers can “process massive unstructured data, such as text/images, extract sentiment, age, and other cognitive features using Azure Data Lake, and query/analyze these by content,” wrote Sirosh.

“This enables what I call “Big Cognition — it’s not just extracting one piece of cognitive information at a time, and not just about understanding an emotion or whether there’s an object in an individual image, but rather it’s about integrating all the extracted cognitive data with other types of data, so you can perform powerful joins, analytics, and integrated AI,” wrote Sirosh.