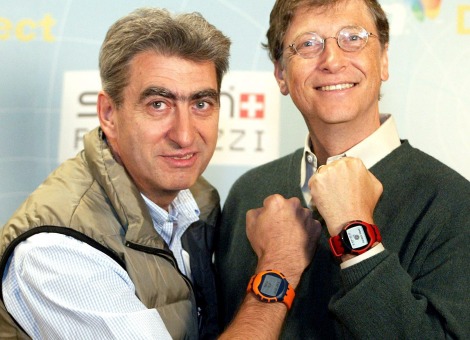 Microsoft will launch a wearable fitness device within weeks
Microsoft is in the final stages of launching a cross-platform smartwatch to track a user’s heart rate, according to Forbes.
The biggest draw of the wearable device is a battery life of more than two days with regular use, approximately double the battery life of the Samsung Galaxy Gear and Moto 360 wearables. The smartwatch will sync with Android, iOS and Windows Phone devices.

A name or cost of the wearable has not yet been released, but according to Forbes the smartwatch will launch in the next several weeks and be available in stores in time for the holiday shopping season.

IBM share prices have dropped as much as 8.4% since CEO Ginni Rometty abandoned previous CEO Sam Palmisano’s pledge to reach adjusted profit of $20 a share by 2015 on a conference call this morning. At the same time, IBM announced it has agreed to a deal with semiconductor company GlobalFoundries to take over the company’s struggling chip manufacturing division, paying GlobalFoundries $1.5 billion over three years to assume control of the business.

Previous award winners and award committee members are not eligible for nomination. Nominations must be submitted on or before Sunday, Nov. 16, 2014 at 23:59 UTC. More information is available here.